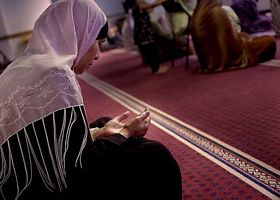 The Masjid is known as the ‘house of Allah’ as it symbolises the place where God is worshipped. This is the place of devotion and proclamation of his Greatness and Majesty. Although the Prophet (peace be upon him) declared that ‘the entire earth has been made a masjid for me’, in other words we can pray anywhere. However, the Masjid has a special place in Muslim society. This spot of land designated as the Masjid is “the best place on earth” (prophetic tradition).

“The person who visits the Masjid is God’s guest and divine hospitality is forgiveness” said the Prophet (peace be upon him). The one who prays in congregation in the Masjid gets his reward multiplied twenty seven times (Hadith). “Whoever waits in the Masjid for the next prayer is protected as he is in a Ribat (fortress) which gives protection from the attacks of the devil and ones ego” (Hadith). The serene, quiet and simple environment of the Masjid lifts the spirit, which helps the worshipper to focus and get absorbed in divine thoughts.

Scholars have likened the Masjid to a ‘magnifying glass’ since it focuses the sun rays onto a single spot, similarly the rays of Divine Mercy are focused in the Masjid on the worshipper. The Masjid is the house of Allah, the best place on earth and it is a fortress. Whoever visits the Masjid is indeed Allah’s guest, graced with Divine hospitality; he is honoured as a true believer. It is the place for enriching one’s spirituality and building social relations. Is this exclusively for men? Is it a men’s club? Do women have no share in this wonderful spiritual place?

In this article I present Hadith evidence to show that women have full right to attend the Masjid. The merciful Master (peace be upon him) did not make it compulsory for them to visit the Masjid but as we will see he kept telling men not to stop them. Here I will not comment on why some later ‘jurists’ banned women from the Masjid. I will confine myself to some of the Ahadith narrated by Imam Bukhari and Ibn Hajar’s (d. 761 AH) commentary.

The virtues of attending the Masjid

Abu Huraira narrates the Messenger of Allah (peace be upon him) as saying, “Shall I not tell you about that which will obliterate your mistakes and bring your near to Allah?” They replied, “ Yes! Surely O Messenger.” He said, “it is to perform the ablution properly in difficult circumstances. A lot of foot steps to the Masjid and waiting for the next prayer after performing one that is the Ribat. That indeed is Ribat” (Muslim).

This state of physical purification is a prerequisite for a state of spiritual purification. After offering his devotion and humble prayer he sits in the Masjid waiting for the next prayer, this is spiritual vigilance, in Allah’s house absorbed in His thought. He is far from the temptations of the devil, the whispers of the uncouthed self and the lures of the glittering world. “This is Ribat, indeed the Ribat”, says the Prophet (peace be upon him). Ribat is the fort from where the soldiers use to keep a watch. The blessed Messenger (peace be upon him) equates this Ribat to the sitting in the Masjid waiting for the next prayer.

The Messenger of Allah (peace be upon him) is recommending a perfect method for self-purification and defining the limits of Islamic asceticism, i.e. solitude and austerity. Not to abandon life, home, family and friends but to live amongst them, yet find time for solitude and communion with Allah. The one who attends the Masjid regularly has been praised by the Mustafa (peace be upon him) in these words:

“Whoever you see coming and going to and from the Masjid, you must give testimony of his faith being complete”. He then recited, “surely the one who builds the masjid is the one who has faith in Allah, the hereafter and fears no one except Him. They are the one who are rightly guided” (Tirmidhi).

In another tradition narrated by Abu Haraira he (peace be upon him) says: “Whoever attends the Masjid, Allah prepares a special hospitality for him” (Muslim).

Praying with the Congregation

Abu Darda says he heard the Messenger of Allah (peace be upon him) saying, “When there are three people in a village or in the desert and they do not pray as a group the devil takes control of them. You must be with the group. Surely the wolf attacks the sheep that is alone and separate from the flock” (Abu Dawud).

We have already read that the prayer is one of the most important qualities of the believer. It is the flavour of faith, the food of the soul and gives peace of mind. It is a personal devotion but should be offered in a congregation. This Hadith is emphasising this group aspect of the prayer.

How valuable it is to offer the prayer in congregation is explained by the Prophet (peace be upon him) when he said, “the group prayer is twenty seven times superior than the individual prayer” (Muslim).

The Hadith under discussion instructs that even when there are only three people they should pray together as a group rather than pray separately. The Prophet (peace be upon him) then gives the similitude of the lone sheep cut off from the flock. The devil who is depicted here as the wolf attacks the lone wanderers, those who are not with the Muslim community or those who live only at its peripheries not taking active part in its affairs.

The congregational prayer has many benefits such as; fostering love and compassion for fellow Muslims, thus strengthening the bonds of brotherhood, equality, since everyone stands humbly together whether he is a pauper or wealthy, big or small. Prayer gives training in being punctual and regular in ones daily affairs. Congregational prayer is one of outstanding features of Islam, the row upon row of believers standing humbly, bowing in unison and then prostrating together, it is a moving experience for any onlooker. The congregational prayer also teaches obedience to a leader (Imam) and gives the sense of belonging to the community.

From Bukhari and Ibn Hajar

Chapter 162- Women going to the Masjids at night and darkness

Abdullah ibn Umar narrates the messenger (peace be upon him) said ”When your women seek your permission to attend the Masjid at night then give them permission” (Hadith no. 865).

Ibn Hajar Asqalani (d.761 AH) is perhaps one of the greatest commentators of Bukhari. Here is a summary of his commentary on this topic:

1. The permission to attend the Masjid hints to the fact that it is not compulsory, since if it was there would be no need to seek husbands permission.

2. He quotes another Hadith from Muslim. Abdullah ibn Umar narrates the Messenger (peace be upon him) said “don’t stop women from getting their share of the Masjid when they seek your permission”. Bilal (his son) said “By God we certainly will stop them”. According to Tabarani Bilal said “I will not let my wife and whoever wishes can let his wife do as she likes”.

3. According to the narration in Muslim, when Bilal said this to his father Abdullah ibn Umar, he was furious at him, he turned to him and cursed him three times and thereafter never spoke to his son until he died.

4. Ibn Hajar comments on this “father and son fight” by saying that “Bilal saw mischief in some women of his time and that made him react in that way to protect his sense of honour and self respect and Abdullah disapproved because he was clearly opposing the Prophetic tradition”.

Umm Salma said “when the Prophet (peace be upon him) finished his prayer by saying salaam the women would get up and leave. He would stay for a while in his place. This was done so that women could leave before the men could see them”.

Anas said, “The Prophet (peace be upon him) prayed in Umm Sulaim’s house, I and an orphan stood behind him and Umm Sulaim behind us” (Hadith no.874).

Aisha (may Allah be pleased with her) said “the Prophet (peace be upon him) used to pray morning prayer in darkness, Muslim women used to come and go without being recognised in the dark” (Hadith no. 872).

Abdullah Ibn Umar said ”There was a woman who used to attend the Morning and night prayer with the congregation in the Masjid. It was said to her why do you come yet you know that Umar does not like that. She said he has not stopped me! She said the Prophet (peace be upon him) said “Don’t stop God’s maids from attending the Masjids” (Hadith no. 900).

Commenting on these two Ahadith Ibn Hajar says “if women are permitted to attend Masjids at night despite that night is time of suspicion, the permission during daytime is even foremost”.