The extremists in Pakistan, can they be sorted out?

I was invited to give a talk at the conference of a Muslim umbrella group back in 2005. The debate was “is extremism a myth or reality?” I passionately argued using theological and socio-political evidence that extremism is a reality and not a myth. It is regrettable that today in 2018 we are still having this debate, rather than seriously tackling extremism. 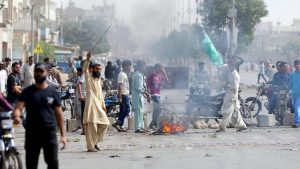 The Muslim leadership seems to be wondering in wilderness. No wonder no one takes them seriously. The recent sad events around the acquittal of Asia Bibi in Pakistan once again highlight the appalling leadership of the Pakistani Ulama and Politicians. The Supreme Court after 8 years, finally decided to throw the case out on the grounds of inconsistent and conflicting evidence. Asia Bibi a Pakistani Christian lady was falsely accused of insulting our Beloved Prophet (peace be upon him), the case was filed 5 days later, and 3 witnesses came forward, each one with a different version of events. However, the self-proclaimed ‘defenders of Islam’ reacted violently at her acquittal and caused a blockade of major roads in the main cities of Pakistan, even causing deaths of several people. Consequently, Imran Khan’s government succumbed, it couldn’t stand up against the unruly, rowdy and misinformed mob.

Who is an extremist?
An extremist is a person who holds extreme or fanatical political or religious views and advocates extreme actions and violence against anyone who disagrees with them. Extremism is a universal phenomenon, found amongst followers of all religions and citizens of every country. The Quran defines a Muslim as ‘mutawasit’, a moderate: “We made you the community of the middle way so that you maybe witness for humanity” (Baqarah: 143).

‘The Middle way’ is the point of balance between the two extremes; rejecting hedonism on the one hand and asceticism on the other, cowardice on the one hand and recklessness on the other. Yusuf Ali says, “The essence of Islam is to avoid all extravagances on both indices. It is a sober, practical religion … witnesses, when two people dispute they advance extravagant claims, a just witness comes between them and brings the light of reason to bear on them pruning all their selfish extravagances. The witness must be unselfish, equipped with first hand knowledge and ready to intervene in the cause of justice.”

The Quran warns, “People of the book, do not go to extremes of your religion” (An Nisa: 171). This is a warning to Muslims not to commit the same mistake as the Jews and Christians lest they fall into excesses either in theology or law.

Ibn Masud narrates the Messenger (peace be upon him) said: “The extremists are ruined, he repeated this three times” (Muslim). On another occasion the Messenger (peace be upon him) described the nature of Islam in these words: “Be moderate, bring people together, make peace and reconciliation and be happy, to achieve this worship in the morning and at night time” (Agreed upon).

The question is then where do those people stand who reacted violently in response to a fair decision of the Supreme court of Pakistan? 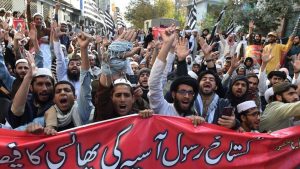 Considering these Prophetic teachings, they are extremists, since they are happy to use violent means to achieve their ends. The Khadim Rizvi group is a new group, the question is can the Pakistani authorities expose and ban them before they turn into the new Taliban? They would be very dangerous for the security of Pakistan. I urge this group who refer to themselves as the ‘lovers of Rasulullah’ to repent and embrace the true peace-loving message of Islam.

What are the root causes of this extremism?

This group advocates the use of violence to bring about political and social change. After listening to a few of Khadim Rizvi’s interviews, I concluded he is characterised by reactionary, angry and defensive attitude that makes him violent and callous. He likes to:

This is a result of his resentment to the negative portrayal of Islam by the media, lack of understanding of the geo-political, global realities, no proper organisational structure and above all the socio-economic deprivation in Pakistan.

Wage a Jihad of love not hate

The overwhelming peace-loving Pakistanis must speak out against these people. The religious leaders must be vocal against the literal and narrow interpretations of Islam these people are advocating. The silence of the Ulama, the lawyers and the politicians gives the impression that they are on their side. Extremists must not be allowed an opportunity to identify themselves with Islam or the Muslims at large.

Sadly, some will accuse me of speaking up for the West, but my motivation is none other than: “Muslims! Stand firmly for the sake of Allah as witnesses for justice. Do not let your hatred for others turn you away from being just. Deal justly for justice is next to piety. Be mindful of God, He knows well what you do” (Maida: 8).

Professor Muqtedar Khan an eminent American social commentator says: “… there is now a growing consensus that those on the moderate side in the Muslim world must assert themselves and join the battle against extremism” (American Journal of Islamic Social Sciences, vol 22: 3 Editorial).

The Pakistani authorities must act firmly and decisively before this group radicalises more young people and spreads their poisonous views. I know that the majority of Pakistani’s oppose this group’s views and actions. Does Imran Khan have the courage to tackle them?

The Supreme Court of Pakistan’s decision was just and wise, it showed the world that this is a country of peace-loving people and allowed Pakistan to be accepted as a noble nation that respects Human rights, it is no longer a Pariah state. This verdict was timely as it coincided with the European Court of Human Rights decision about an Austrian woman who had made disparaging remarks about the Prophet.

On 25th October 2018, the European Court of Human Rights made a significant ruling; to insult the Prophet Muhammad is not “free speech”. In other words, anyone who insults the Prophet of Islam under the pretext of freedom of speech will be in breach of the law. The court explained that “the applicant’s statements could arouse justified indignation in Muslims” and “amounted to a generalization without factual basis”, the ECtHR said that the woman’s comments could not be covered by freedom of expression… and her statement was “an abusive attack on the Prophet of Islam, which was capable of stirring up prejudice and putting at risk religious peace.”

I must add a word or two about the blasphemy law, the Pakistani legal system inherited this law from the old British colonial period. The British in the 1880’s legislated this to prevent religious strife among Muslims, Hindus and Sikhs. In Islamic law there is no such ruling concerning blasphemy. The Hanafi school of Jurisprudence, which is the predominate school of law followed by Pakistani’s categorically denounced death penalty for such crimes. Here are just three references: “As for insult or reproach of the Prophet, our companions (the Hanafis) say: If he is a Muslim, then he has become an apostate, and if he is a dhimmi, then he is given a tazir and not killed” Ahmad ibn Muhammad al-Tahawi (died 321 AH/933 CE), Mukhtasar Ikhtilaf al-Ulama, vol. 3, p. 504 #1652.

Al Tahawi said “Whoever insults the Prophet from the people of dhimma, he is chastised, and not killed. This is because they have already assented to their religion, and from their religion is worship of other than Allah, and denial of the Messenger of Allah. This is evinced by what has been narrated: “The Jews entered upon the Prophet and said, ‘Death be upon you.’ The Prophet said, ‘And upon you” Ahmad ibn Ali al-Jassas (died 370 AH/981 CE).

Conclusion
Here are some suggestions for Imran Khan’s Government:

Look at how the Beloved Messenger (peace be upon him) warned us about injustice, he said “Beware of the prayer of the oppressed, for there is no barrier between it and Allah” (Bukhari). In another Hadith he taught: “Allah the Exalted said: O My servants! I have forbidden oppression for myself and I have made it forbidden among you, so do not oppress one another” (Muslim).

I believe that these strategies will help Pakistan to face the challenge of extremism. The big question is, are the Government, Armed Forces and religious leaders ready to take up the challenge? Finally, Asia Bibi must be given her freedom like any other Pakistani. Will any brave nation give her asylum if she can’t live safely in Pakistan?