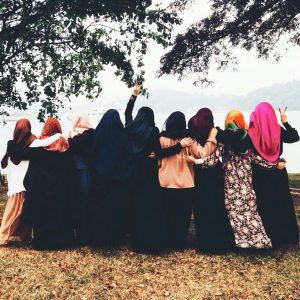 In a society that frequently views friendship through the lenses of romance and love affairs, no wonder we have forgotten the art of friendship. Yet friendship is far more than that. In this article I explore the art of friendship in light of Quran and Sunnah. How is Allah a friend of the mortal human being? What is the meaning of being the friends of Allah Almighty? Friendship is far more than mere familiarity, acquaintance, greeting and meeting, in fact it is about sharing common interests and a sense of care for each other.

It was a bright morning, the sky was clear and blue and the singing of the birds made the journey pleasant. Suddenly something in the trees caught the traveller’s eye. In the nearby tree were perched two birds seemingly in conversation with each other like two old friends. But they were very different from one another. When the traveller approached them he saw that one was a Dove and the other a Crow. What on earth do they have in common he asked himself. By now the lone traveller was becoming more and more inquisitive. As he zoomed his gaze at the two birds he found that both were one legged.

Saadi Shirazi the Persian poet after narrating this story tells the moral of the tale; people are drawn together in friendship of their common interests and shared vision. The blessed Prophet (peace be upon him) said: “a person has the religion of his friend, so be careful who you choose as your friend” (Muslim).

A friend is a person with whom one enjoys mutual affection regardless of family relationships. The Arabic noun ‘Waliyun’ means nearness, beloved, friend and helper. There are two types of nearness ‘Universal nearness’, that every person in fact every atom in the universe has with its creator. If this weren’t there then there would be nothing in the universe. Allah says, “We are nearer to you than your jugular vein” (Surah Qaf: 16). The second is ‘special nearness’ that is love which is granted to selected people, there are many degrees of this nearness, one after the other. The two basic conditions for this are faith and piety (Tafsir Mazhari).

What does it mean to be near to Allah? Imam Razi says, ‘Nearness to Allah in terms of space or direction is impossible, the nearness to Allah is when the heart is occupied in Divine remembrance, everywhere: he sees the signs of Allah’s power, hears the Divine verses, sings Divine praises. When he moves he moves in worship, when he struggles and strives he does so in obeying Allah’ (Tafsir Al Kabeer).

Friendship gives a sense of belonging, security, happiness and lessens misery of loneliness; it enables the sharing of joy and grief. Friends provide us company when we are alone and give us help when we are in need. They are a comfort in times of distress and advise us when we are faced with difficult decisions in life. The warmth and joy of friendship is one of the most enviable things one can hope for. If life was a garden then friends are its flowers.

The messenger (peace be upon him) said, “Once a man set out to visit a friend of his in a far off town, Allah sent an angel in the form of a man who met him on the way. The angel asked him, “Where are you going?” He replied, “I am visiting my friend in this town.” The angel said, “Has he done any favours for you?” The man said, “No, I have no desire except to visit him because I love him for the sake of Allah.” The angel said, “I’m a messenger sent by Allah to tell you that Allah loves you as you love him” (Muslim).

Anas (May Allah be pleased with him) the young disciple said that a Bedouin came to visit the Messenger (peace be upon him) and asked him, “when is the final hour coming?” The messenger asked him, “what have you prepared for it?” He replied, “love of Allah and his messenger.” Then He (peace be upon him) said to him “you will be with him who you love.” On the day of judgement there will be such people about whom Allah will ask, “where are those people who loved one another for my sake? Today I will give them my shade when there is no other shade.” (Muslim)

The wrong friendship can be fatal

Sometime ago a sad incident brought home to me the value of these teachings about friendship. A young man, a member of my congregation was killed in a car accident. He was with his friend who had been banned from driving. As they drove they were seen by the police. The driver tried to turn away but entered a ‘No Entry’ zone and had a head on collision with an oncoming car. The young man died on the spot and the driver was seriously injured with a broken back. The young man left behind a young widow and a one year old son.

Today, many youngsters are lured into all kinds of vices by so called ‘friends’. These innocent 14 and 15 year old boys and girls who were perhaps ‘little angels’ just a few months ago, turn into horrible thugs, burglars, criminals and get involved in drugs and violence. “You should associate only with the believers and the most deserving of your food is the righteous” said the blessed Mustafa (peace be upon him) (Tirmadhi).

The poet Jalauddin Rumi tells a story, “There were two travellers, as they were passing through a forest, a grizzly bear followed them. He would not leave them and walked behind them everywhere. One of the travellers also drew closer to the bear. His companion told him it isn’t wise to be too close to the beast. But he ignored his advice dismissing it as a sign of jealousy. Finally the two travellers parted. The bear by now had strengthened his friendship with the man, following him like a shadow everywhere. One afternoon as he rested under a tree the loyal bear stood guard over his friend. He waved his mighty arms over the sleeping man’s head to brush away any flies. But the flies were swarming around him like moths around a lamp. By now the bear was getting fed up with the flies, in a fit of rage he flung a stone at them and in so doing this sincere service he smashed his friends head, killing him on the spot.

The blessed Mustafa (peace be upon him) succinctly tells us of the value of good friendship he said, “The example of a good and a bad companion is that of a perfume seller and a black smith. The perfume seller either puts the perfume on you and tries to sell it to you, but in the black smith’s workshop you will either burn your clothes or they’ll be blackened by the soot” (Muslim).

The advice is choose your friends carefully. Select the partners on journey of life that will bring you closer to Allah. Those that remind you of Allah as the beloved Messenger (peace be upon him) told us in this Hadith. Avoid the grizzly bear, maybe his intentions are good but his understanding of who you are and what you need to succeed are seriously lacking.

The heart of friendship is being sincere to each other

The Prophet (peace be upon him) said, “Religion is to be sincere.” Someone asked, “Sincere to whom? He (peace be upon him) replied, “To Allah, His book, His Prophet, the Muslim leaders and the Muslims” (Reported by Abu Ruqiya bin Aus in Bukhari). Sincerity towards another person is characterised by two concerns: seeking their best interests and constantly advising them to do the right thing.

Sincerity to “Muslims in general” means to guide them to that which is in their best interests in this world as well as in the hereafter. Supporting them by speech and actions, hide their faults, fulfil their needs, remove harm from them and bring good fortunes to them. Enjoin good and forbid evil with kindness, wish for them that which one wishes for oneself.

We read with envy such glowing description of the perfect friends, we too long to have them. On the other hand it makes us reflect on our own inadequacies as friends. Where is that selflessness? Where is the sincerity towards others? And where is the desire to do best for others?

The friends of Allah

Aulyia Allah is a Quranic term that refers to the ‘friends of Allah’, people who are close to him, completely dedicated to Allah’s service. They are serious about Allah, they live and die for His sake, they love and hate for His sake; people whose motto is “my prayers, my sacrifices, life and death are all for the Lord of universe“ (al An’am: 162).

These people are living proof of Allah, evidence of Him, Ayatullah– signs of Allah, who display his generosity and make his compassion tangible in the world. They are people who have taken Allah seriously, His prophet (peace be upon him) and religion seriously in contrast to those “who consider their religion a thing of play and amusement”. Muslims trust these friends of Allah, they love them and Allah’s love starts here by being impressed by them, trust in these men of Allah is the starting point of Divine love. As our relationship with them develops we want to live like they live, we want to follow them. Allah says: “Beware! The friends of Allah are fearless and they shall not grieve, they are strong in faith and ever Allah conscious. For them is good news of happiness in this life and hereafter. Nothing can alter the Divine promise this is supreme success” (Yunus: 62-64).