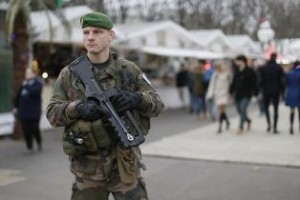 The Chief Imam of Karimia Institute has said “we condemn the barbaric and senseless murder of journalists and the policemen in Paris. This is an attack on a fundamental institution of democracy and just society, attack on journalists is an attack on freedom of speech and this is condemnable. We hope that the terrorists are caught quickly, in the meantime our thoughts and prayers are with the families of the murdered. As people of faith and spirituality our second response is to show solidarity with people of France, this we will do by fasting and praying on Monday 12th of January. We ask all peace loving people to fast with us. Finally, we pray to our mighty Lord to protect our world, bless us with peace, give us heart and mind that is full of care and love of humanity. Amen”

Terrorists carry out their heinous acts to gain publicity for their cause but what is far more sinister is their motive to create division and conflict in the country and it is this that we need to be aware of and not let them succeed. The entire community has to show solidarity and unity. This means that we stand together, united against such evil forces that try to divide our different communities and create rift amongst us. I’m very pleased to say that from the President of France to Presidents of mosques in France, Muslims and non-Muslims have remained united against the terrorists.

These are not only difficult times for France but for all of Europe simply because the terrorists have attacked the fundamental pillar of a liberal democracy, freedom of speech. I will explain more about this below, but here I want to present three activities we all can do for each other that will ensure that terrorists do not succeed in their mission of creating conflict. These three activities are: cooperation and unity, mutual social, spiritual/moral development and thirdly pray for each other. Cooperation is about working together for a common good, the shared goal and mutual benefit, the way to achieve this is through moral and spiritual values of generosity and kindness for the sake of God and when this is accompanied by sincere prayers, then most wonderful things can happen. These are powerful dynamics at work.

Freedom of Expression in Islam

I want to clarify that freedom of expression is one of the great contributions of Islam to the world and its progress and civilisation. It is not a modern concept. It is based on Quran and the Sunnah of the Prophet (peace be upon him). Whilst Islam is predominantly a religion of duties, responsibilities and carrying the mantle of being the divine representative on Earth, it is also a religion that gives individuals rights. One of those fundamental rights is the freedom of expression. By freedom we mean ‘the ability of the individual to say or do what he or she wishes, or to avoid doing so, without violating the rights of others, for the limits that are set by the law. ’[1] The purpose of freedom of expression is; the vindication of truth and the protection of human dignity.[2] Both the Quran and Sunnah repeatedly discuss these freedoms of expression under following names:

Whilst Islam promotes and encourages the development of these freedoms it also puts restrictions on freedom of expression, in order to prevent harm to others. These restrictions on freedom of expression can be divided into two main categories; moral and legal. The violation of freedom of speech like; backbiting, cynicism, exposing the weakness of others, acrimonious talk and lying fall under the moral category. Others, like sedition Fitnah, heresy and innovation in religion Bidah, slandering Qazf, fall under the legal category.

Would the Prophet condone murder of his opponents?

The Prophet forgives his tormentors; The trip to Taif

The intense trials and tribulations of the Prophet’s (peace be upon him) trip to the city of Taif illustrate in abundance the virtues of forgiveness and forbearance, which were the hallmark of his gentle, stoical personality.  This trip came soon after the death of his beloved wife and constant companion of 25 years Khadija (may Allah be pleased with her) as well as that of his patron uncle Abu Talib who had been an impenetrable bulwark that stood between his nephew and the brutal Quraish. He decided to try the nearby city of Taif hoping that his call to Islam would find more willing recipients there than he was having at that time in Makka. However, the tribe of Thaqif, who ruled the city, not only declined to listen to him but mocked and ridiculed him mercilessly and expelled him from the city.

In the face of such a fierce opposition, the beloved Prophet (peace be upon him) had no choice but to retreat hastily. They ran after him, pelting him with stones which caused him severe injuries. In excruciating mental, physical and emotional pain, bleeding and exhausted, he took refuge in a vineyard. Feeling dejected, forlorn, helpless and humiliated he raised his hands and prayed a prayer which has become an iconic symbol of utter submission to the will of God in the face of complete and total despair. Read the intensity, the beauty and the moving humility of this magnificent supplication;

“O God! Please consider my weakness, my shortage of means, and the little respect  people have of me. Oh, most Merciful God! You are the Lord of the oppressed and you are my Lord. To whom would you leave my fate? To a stranger who insults me? Or to an enemy who dominates me? Would I that you have no wrath against me! Your pleasure alone is my objective.”

The Muslims had been attacked three times by the Makkans, at Badr, Uhud and third time when they gathered all their allies to wipe out the Muslims. However, look at the goodness of the messenger of God (peace be upon him), when he heard that people in Makka were facing a famine, he immediately sent them a supply of food and 500 gold coins as charity from the Muslims of Madinah.

The Conquest of Makka

The conquest of Makka is perhaps the most striking example of the messenger’s (peace be upon him) forgiveness and moral character. After twenty years of hostility and persecution he (peace be upon him) returns to Makka with a mighty army the likes of which the Quraish had never seen. However, he entered with utmost humility, with a bowed head, no swagger, no trappings of an all-mighty conquering hero, no revenge or retaliation. Not a single person was killed in this phenomenal conquest.