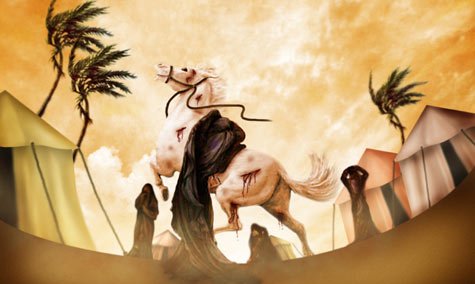 In Karbala, Imam Hussain told ibn Zayd, a general of Yazid’s army that he was not looking for armed conflict and wanted peace. Imam Hussain proposed to accept any of the three conditions below:

Ibn Zayd refused to accept peace and warned that he would launch an attack the following day. That night Imam Hussain gathered his family and relatives and said “you people are free to go, the enemy only wants me.” Everyone replied, ‘we will stay and die with you.’ All night they prayed and read the Quran. In the morning Imam Hussain and 72 of his followers stood and faced the army of Yazid. Before the battle began, Imam Hussain said to the enemy, “O people! Do not be hasty, listen to my words. If you accept my offerings of peace and be just to me then you will be the most fortunate of people. Look who I am! Will torturing and killing me give you pleasure? Am I not your beloved Prophet’s (peace be upon him) grandson? Am I not the son of Ali, one of the very first to accept Islam? Can you not remember the sayings of the Prophet (peace be upon him) regarding me and my brother that we will be the leaders of young people in Paradise? Will you still go ahead and shed my blood?”

But the enemy was oblivious to these holy words and in reply immediately launched an attack. Imam Hussain and his followers fought back bravely. The enemy was surprised, they could not break through. For days Imam Hussain held them back. But the overwhelming numbers of the enemy eventually surrounded the camp and cut off their water supply from the river Euphrates.

The real time of Muharram had arrived. The sun was setting. It was Asr time. The Imam was preparing to leave his tent. Standing amongst his family, their sadden faces and tearful eyes gazed at him. Sayeda Zainab looked at her injured brother. Sayeda Sakina took a final look at her father. Sayeda Sharbanu also looked at her beloved husband perhaps for the last time. Imam Hussain consoled everyone and counselled them to be patient and determined. He said his farewell and left the dark and gloomy tent.

He came to sow the seed of ‘standing up for the truth’ and to water the fields of Islam with his blood. Since in nature one body gives way for another to be born in the world. The seed disappears in the soil so that the shoot may appear, buds of cotton lose their identity so that man may wear cotton, wheat grains are milled so that man may get bread, oil burns so the room may shine, coal burns to produce the heat to produce steam to drive the turbines, which produce electricity.

The grandson of the Messenger (peace be upon him) suffered pain, endured sorrows, allowed his children and relations to be slaughtered so that people may learn to stand up against tyrants and oppressors. So that people would not submit to cruel rulers. His mouth was like dry wood as he headed straight for the river. Shimr said to Amr “look Hussain is thirsty and weak but still we can’t control him, he is dying but more alive than us. If he is allowed to drink water he will be revitalised, stop him now!”

Amr ordered his soldiers to close in on Imam Hussain. Imam Hussain lifted a handful of water to his mouth but a devilish man named ibn Ram fired an arrow at him and it struck his mouth. Imam Hussain fell back painfully pulling out the arrow. He looked at the heavens and cried; “oh Lord! Who else can I complain to other than you.” Blood gushed from his wounded mouth, like an injured lion he got up, took his sword and charged at the enemy. The son of Haider was ferocious and fought courageously, his sword moved like electric, chopping the heads of the enemy. The enemy encircled him, drew closer to him. Imam Hussain was bleeding from his 45 wounds, with arrows pierced all over his body. Finally, ibn Shareek cuts off his hand, he bled so much that there was no strength left in his right hand and his legs gave in, he fell. The Imam was severely wounded, fallen, all alone, no one to help him. Then Sunan came forward and cut off Imam Hussain’s head and thus the greatest sacrifice was completed.

All were martyred except the women and Ali ibn Hussain, the son of Imam Hussain who was critically ill. The Imam’s head was cut off and put on a spear and sent to Yazid in Damascus.

The story of Islam is simple but colourful, it began with Ismail and ended with Hussain

Download the Kindle book to read more about this tragedy: Tragedy of Karbala