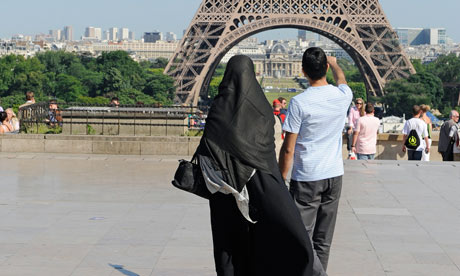 Jack Straw’s untimely and unwelcome comments have sparked off an interesting debate. Muslim women have been guidelines on dress code by the Shariah. We see the niqab is not a requirement it is a custom of some Muslims. Allah says:

“Say to the believing women to lower their gaze and to be modest; to cover their adornments except such as naturally displayed; to draw their veils over their bosoms and not to reveal their beauty except to their husbands, their fathers… Believers turn to Allah together in repentance so they may prosper” (An-Nur: 31)

(1) Lower the gaze, not to stare at people, not to look with lust at others in brief to be modest and shy. The habit of keeping you head down is a display of moral virtue of modesty shyness and sense of shame

(2) Second is to physically cover their natural beauty. This is the hair, the neck and the breasts.

The Quran is teaching the Muslim women to adopt a particular attitude and behaviour, be modest and dress modestly. Most traditional commentators have concluded from this verse and verse 59 of Ahzab that the niqab the covering of the face is not included in this.

“O Prophet! Tell your wives, daughters and believing women to draw their veils over themselves that is the proper conduct so that they maybe recognised and not molested. Allah is forgiving and merciful” (Ahzab: 59)

Except for Ibn Kathir who thinks niqab is necessary. It is interesting to note that some commentators after giving the Shariah ruling on women’s dress code present their own strict view that they prefer the niqab. However they make this absolutely clear that this is a personal preference (See Zia ul Quran and Tafsir Usmani).