We are invited to study both together 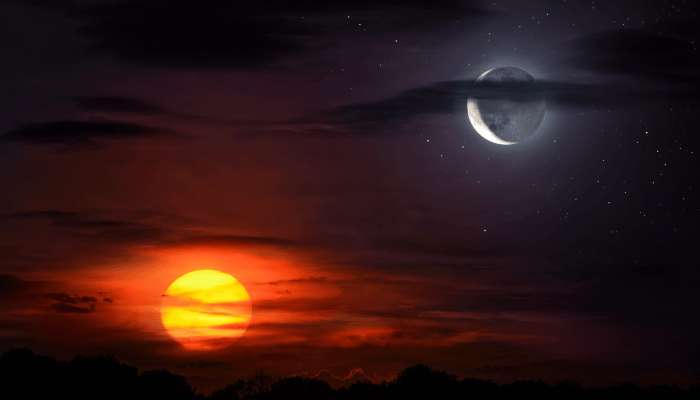 Science and Quran are not at loggerheads, there is harmony and unity of purpose, for the Godly mindset to understand. As a trained scientist I know that science attempts to explain, investigate and find out how the natural world works. Its understanding helps us to better understand the world that Allah has made for us: “We created the sun and the moon for you, we made the night and day for you.” The Majestic Quran is Allah’s book to guide humanity and how we can live a Godly life during our short probationary period.

Science deals with mechanisms, the how of, and the processes of physical and living things. The Quran deals with the meaning and purpose of life. Science is the how, the Quran exceeds this and tells us why. For example, science can tell us about how the seed grows, and what it needs, and the Quran tells us who designed it and why. The Quran asserts scientific truths regarding the creation that are natural since the creator is speaking about his creation, he knows it well. He is the Creator of the universe, and his speech is his Divine revelation. Through the Divine revelation, we understand faith and learn about the purpose of creation. So, science and revelation interact. For example, Physics keeps discovering the complexities of the universe: the atom, the subatomic particles like the boson discovered a few years ago. Since Allah is the creator of the Universe, it is not possible to understand fully the creation without reference to Him. The revelation on the other hand is Allah’s speech to communicate the purpose of creation, and the place human beings have in it, how they are to be his representatives on earth.

In Surat Yunus, the Quran asks why people are surprised that Allah sent the revelation to a human being. Then it abruptly introduces Allah as the Creator of the universe; the sun and the moon, the two heavenly bodies that establish a daily cycle of night and day on Earth, all for a clear purpose.

“Allah is your Lord, Who created the Heavens and Earth in six days then established Himself on the throne, overseeing the running of the entire universe. No one can intercede without His permission: Such is Allah, your Lord, so worship Him. Will you not then pay attention? To Him, you will all return. Allah’s promise is true. He initiates the process of creation and then restores it to its original state to reward fairly those who believed and did righteous deeds. He gave the sun its radiant glow and the moon reflects light, and Who precisely determined its phases, so that you might calculate the passing years and keep time” (Yunus:3-6). Notice the sun has a ‘radiant glow’ and the moon ‘reflects light.’ This is now a scientific fact that the sun produces light whilst the moon is a reflector, who knew this in Arabia in the seventh century?

Allah is the Creator who creates ‘from nothing’

Allah Almighty is the creator of everything. This means the creation does not necessarily have to exist, it is contingent, dependent and reliant on the Creator. Everything depends for its existence on Allah. According to a tradition, Allah speaks “I was a hidden treasure and wanted to be recognised and understood for the sake of love so I created.” The Creator is one, eternal and independent; the creation is finite and dependent. “Say: He is Allah the one, Allah is eternal, neither a son nor a father of anyone, none is equal to Him” (Surat Al-Ikhlas). This is the doctrine of Tawhid, the oneness of the Creator.

The harmony of Science and Quran

The Muslim view is that Science is not an alternative worldview that replaces Allah with human reason. Neither does science replace the Quran. Muslims see modern science as enabling an accurate view of Allah’s creation. For example, in the Quran Allah asserted “we are the expander of the universe”. Science has now revealed the vastness of the Universe, the billions of stars and galaxies, and its amazing and mind-boggling size. This view of Science enlarges the limits of faith and elevates one’s understanding of how great, and mighty Allah the Creator is.

The study of nature leads to philosophical questions that are beyond the scope of Science. The key question is not how the universe came into existence but what is the relationship between this and the Creator. These things help one avoid a faulty rejection of all science, aggressive secularism, and a wrong view of the conflict between Science and religion.
Take this example from Surat Al-Waqiah, “We created you so why don’t you admit this? Have you not seen the semen you discharge? Did you create it yourselves or did We? We have decreed that death will end your worldly life, nothing can stop Us from changing you and recreating you a new… Have you not seen what you sow? Do you make it grow or are We the ones who grow it? … Have you not seen the water that you drink? Do you send down the water from rain clouds or are We the ones who send it? If We wanted, We could make it bitter. So, why do you not thank Allah? Have you seen the fire you burn? Did you make the wood or are We the ones who made it? … So glorify the name of your Almighty Lord… Why is it that when the dying person takes the last breath you cannot return it? You watch helplessly? We are closer to the dying person than you, though you cannot see. Why do you think you don’t need Us? If you are truthful, why can’t you bring back the ebbing life? (Al-Waqiah:57- 87).

Muslim scholars regard science as a tool to understand the mechanics of creation. “People, worship your Lord Who created you and those before you, so that you may be pious, mindful. Who spread out the Earth for you, made the sky a roof and sent down rain by which He produces fruits, your sustenance? So do not deliberately make rivals equal with Allah” (Al-Baqara:21-23). Notice how directly Allah is drawing our attention to the beauty of creation and its benefits, and therefore humans should worship him.

The understanding of nature leads to recognising the mystery of Allah’s creative power. Understanding science leads us closer to Allah. Now we can deal with scientific theories of evolution, the Big Bang, thermodynamics, quantum theory, theory of relativity… The difference between Science and revelation is that science is often tentative, whilst revelation is absolute. The elaborate order in nature is being revealed by science, it shows that things evolve in a systematic way, and are designed, organised. So, there must be an amazing designer, architect, fashioner, engineer, innovator, maker and creator. That’s Allah!

The question is ‘can Science enhance our appreciation of the Quran’s teachings?’ Since Allah created humans for a specific purpose, and endowed them with remarkable capabilities, though they are like other living creatures, sharing their DNA and other vital processes they are different. They were endowed with something special that no other creature has, God’s spirit. So, they have an existence beyond the worldly realm, more than material beings. The animal-human is one thing, but the spiritual human is another thing, poles apart.

Humans are Allah’s representatives on earth, expected to believe and worship. However, the Human vision of creation is distorted by sin. That’s why we need the Quran; it portrays the human being as a special agent of the Creator, endowed with intellect who can discern truth from falsehood. The Holy book provides a clear direction, an inner motivational force driving us ever closer to the Lord.