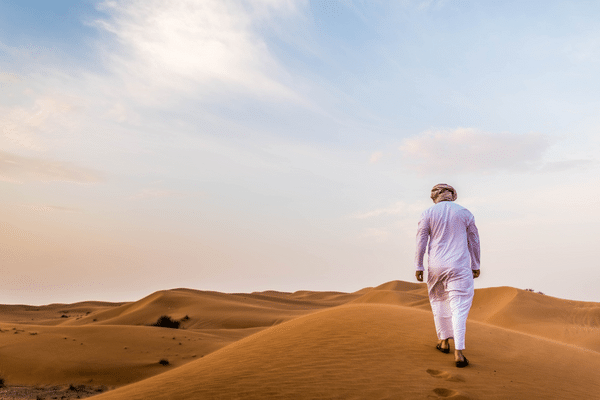 Ishfaq Ahmed a famous Pakistani intellectual said, “occasionally I go on a spiritual retreat as instructed by my Spiritual guide. I don’t head for the forest but instead, turn to the dry and arid desert. I understand this is also the practice of the Prophets. The Thar desert lies deep in the heart of Sindh, it is my favourite place. It is one of the most heavily populated desert areas in the world with the main occupations of its inhabitants being agriculture and animal husbandry”.

A spiritual retreat, also known as chilla or Khalwa is a common practice of Godley people who go into seclusion, often when they need spiritual re-energising and recharging their moral batteries. The Beloved Messenger (peace be upon him) would climb the mount of Hira outside Makkah his hometown. It’s time spent in deep contemplation, meditation and worship. It’s a way of strengthening the Divine-human link. There are numerous benefits and reasons for seclusion, but specifically this type of leaving everyday life behind for a period of time and going into seclusion with the goal of altering one’s consciousness and connecting with the Divine in a deeper way.

In modern practice, retreats can last anywhere from a day or two to the traditional forty days. In addition to repeating the name of Allah, you can also be assigned a wide variety of spiritual practices to aid your journey towards understanding and connecting with the Almighty.

Ishfaq recounts an event that took place on one of his retreats. He goes on to say ‘once I was staying in the desert, there were a few settlements nearby, so people used to pass by with their animals for grazing or carrying their goods to be sold in the neighbouring market town. A fifteen or sixteen-year-old teenager used to pass by me daily, carrying a basket full of melons on his head, which he sold at the market. There was also a little girl barely five or six years old running and twirling around behind him. I bought his melons and started talking to him, it transpired that his parents had died. His only livelihood was selling melons and he always took his sister with him since he couldn’t leave her alone at home’. One day I asked him to tell me ‘why does your sister walk behind you; she should be in front so you can see that she’s safe.’ The boy gave a reply that struck me like an arrow and brought tears to my eyes. He said, ‘sir, you know the sun is scorching hot, when I walk with the basket on my head a long shadow falls behind me, so I want my sister, this orphan sister of mine to be in my shadow, to walk in my shadow and be shielded from the burning rays of the sun.’

Ishfaq says “I tried to stop my tears, but couldn’t, I cried at hearing these words of the desert boy. That day this illiterate boy taught me so much, how to love others, how to care for your sister and look after an orphan. In one sentence this boy taught me so much. This is the son of the desert”. I wondered whether he knew what the Messenger (peace be upon him) had taught about caring for an orphan, “the one who cares for an orphan will be with me in paradise like this” he (peace be upon him) gestured with his index and middle finger slightly apart (Bukhari). When a man complained about being harsh and hard-hearted the Messenger (peace be upon him) said, “be kind to orphans and feed the needy” (Mishkat).

In a society where family ties are fast disappearing, we must rediscover brotherly and sisterly love. The relationship of siblings is so crucial to the survival of the family. It’s the best way to respect gender differences and understand the man-woman relationship.