The recent controversy over anti-Semitic comments made by Naz Shah MP once again challenges us to re-evaluate our attitudes and behaviour towards others. On her Facebook page in 2014 before she was elected as MP for Bradford West she made these comments, “Israelis should be deported to the US.” A comment not too different from the one made by Donald Trump, “Muslims should be banned from entering US.” The Muslims were furious because they sensed an attitude of resentment and hatred, very simply ‘Islamophobia’. So it is not surprising that our Jewish community felt similarly about the comments of Naz Shah. Muslims must dissociate themselves from such comments and feelings and also condemn them. Otherwise we stand accused of hypocrisy and bigotry, as Muslims we must show a caring attitude towards everyone, and reject any kind of discrimination and injustice. In light of this row I would like to urge Muslims to carefully consider how we can build better relationships with our Jewish neighbours in Britain. 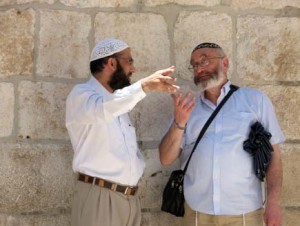 Jews and Muslims have so much in common

Three of the most common names used by Muslims to name their children are Ibrahim, Yusuf and Ishaq, these are names of the three great Semitic and Jewish Prophets. The readers of the Quran are frequently reminded “Say, we believe in Allah and the revelations given to us and to Ibrahim, Ismail, Ishaq and Yaqub and Musa and Isa, we make no distinction between them” (Al Baqarah: 136). No wonder Muslim parents are proud and eager to name their children with these Jewish names. The Quran frequently affirms the validity of both Judaism and Christianity. It frankly acknowledges both of them as a religions revealed by Allah. This was an important step towards accepting ‘others’ and teaching Muslims to respect others. To make this even more obvious the Torah and the Gospels; the Jewish and Christian Scripture are both described as, “Guidance, divine mercy and light” at least a dozen times in the Quran.

“We are one community” said the Prophet Muhammad

The Prophet of Islam (peace be upon him) migrated to the city of Madina in 622 CE, here he (peace be upon him) found three considerably powerful Jewish tribes living along with the Arabs and in order to cement a closer bond between the Muslims and these Jewish tribes he made a treaty known as the ‘Misaq al Madina’ or ‘Treaty of Madina’. It stresses the importance of social and economic ties and the fact that all the signatories will defend each other in case of external threats; in it he (peace be upon him) said, “We are one Ummah-one community.” No wonder that practising Muslims have always recognised and honoured the people of the book and particularly the Jewish community. Muslim history from the early times to the days of the Ottoman Khilafa has been friendly and harmonious with Jews. Prof Al Faruqi captures this eloquently, “After centuries of Greek, Roman and Christian oppression of the Jews… They looked towards the Islamic state as a liberator. Many of them readily helped its armies… This brought affluence and prestige to the Jews, some of whom became ministers and advisers to the Caliphs. Indeed, Judaism, its people and language developed their golden age under the aegis of Islam (taken from ‘Islam and other faiths’ by A. Siddiqui published by the Islamic foundation).

The Quran recognised the existence of other religions and taught respect for human brotherhood and promoted pluralism, which is to accept that people of other faith have the right to assert the validity and truth of their faith and even claim it as the only true faith. This indeed was a paradigm shift in human thinking and human civilisation’s development. The glorious Quran forcefully declared freedom of religion, “There is no compulsion in religion, since the true guidance is distinct from the error” (Al Baqarah: 256). And again, “For you is your religion and for me is mine” (Al Kafirun: 6). The Quran reminded people, “If Allah willed he would have made you a single community however, he wanted to test you through that which he has given you, so compete amongst yourselves to do the common good” (Al Maidah: 40), making it absolutely clear that the differences in our race, creed, caste and cultures are divinely ordained and commissioned to be respected. That is Allah’s will and we have two accept it as it is and not as we would want.

The Prophet stands up for a Jewish funeral

Jews and Muslims must care for each other

In conclusion we can confidently say that Muslims are proud of using Semitic Jewish names for their children, the Quran insists on embracing diversity and pluralism, the Prophet (peace be upon him) urges Muslims to respect the humanity of all, this provides strong deterrence for anti-Semitism. A Muslim who is hostile to Jews and discriminates against them will be violating these teachings. The pluralism being promoted here by the Prophet (peace be upon him) is important since it is underpinned by the moral virtue of justice and the reality is that without justice there can be no respect and peace in the world. Therefore the Quran urges believers to, “Stand firmly for justice even if it means going against your parents or relatives and whether it is against rich or poor, for God can best protect both” (An Nisa: 135).

Therefore the Muslim and the Jewish minorities living in Britain must work together for establishing justice here and in the wider world. They must hope and pray for peace between Israeli’s and the Palestinian’s in order to produce once more that golden period of Jewish-Muslim relations, Insha Allah!

Back to Naz Shah

Mrs Shah has since then profusely apologised and seen her mistake for example in the house of common she said, “I hope you will allow me to say that I fully acknowledge that I have made a mistake and I wholeheartedly apologise to this house for the words I used before I became a member,” she said. Furthermore, she has apologised to the wider Jewish community and promised, “As an MP I will do everything in my power to build relations between Muslims, Jews and people of different faiths and none”. I presume the challenge for the Jewish community is will they accept this apology and forgive. One brave soul, a senior Rabbi ‘Laura Jenner Klausner’ of the Reform Judaism movement has just done that and accepted her apology and welcomed her for tea at her home. This is the true spirit of Judaism and the God of the Jews.

It is important to remember that our politicians are human beings who will make mistakes and when they make a mistake and they sincerely apologise we should be willing to forgive them. I think this is the magnanimity that we expect from our Jewish friends. However, this does not reduce the enormity and the abhorrent nature of anti-Semitism.