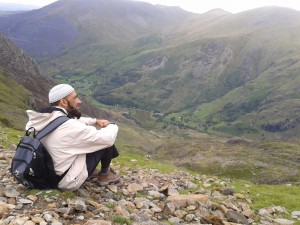 Islamic projects are always facing financial crisis, somehow by the Divine grace they manage to pull through. Since Dawah work is very close to my heart, with a group of “friends, admirers, readers and critics”, we decided to climb for this noble cause, here I reflect on the moral and spiritual lessons I learnt in that wonderful ascent.

I have never given much thought to that most permanent feature of our landscape, the mountain. Yet when one sees a mountain many powerful adjectives come to mind; tall, majestic, solitary, ancient, and vast. It seems like a handy metaphor for the smallness of man and perhaps the insignificance of man like a grain of sand in the vastness of the desert. The role of mountains in The Majestic Quran is multifarious. They can be symbolic or metaphorical, or they can simply provide a dramatic setting. In Surah Al hasher, Allah compares the overwhelming power and might and majesty of the Majestic Quran with that immovable feature our landscape the Mountain. Allah says; “Had We revealed this Quran on a Mountain, you would have seen it humble itself and turn to dust out of fear of Allah. We give these examples so people may reflect.” (Al Hasher: 21)

Throughout human history, the Prophets of Allah climbed mountains or sometimes they were invited to the mountain. Moses went to mount Sinai, Jesus to mount Olive and our beloved Prophet Muhammad (peace be upon him) to mount Hira. Surah Balad uses the metaphor of the steep path and mountainous track to describe the difficulties of life. Life is a struggle, a jihad. The Prophet (peace be upon him) lived in a city surrounded on all sides by black rugged mountains, so it’s not surprising that when Allah swears by a city, it is the city of mountains, Makkah.

Allah Almighty says “I swear by this city, where you, live freely? … Every human We created experiences hardship… He hasn’t yet set foot on the steep mountain track. What can explain to you the mountain track It is to free a slave, to feed on a day of severe hunger an orphan relative, or a penniless and distressed person. Only then is he a believer, who instruct each other to be patient and kind.”  (Al Balad)

In these verses life is symbolised as a steep path, this is followed by an explanation of what is meant by the steep path, the Quran tells the reader five features of this steep path:

On the 24th of August 2013, some 50 people took part in the Snowdon challenge organised by Karimia Institute. The aim was to raise funds for our Dawah magazine ‘The Invitation’. We had children, teenagers and the elderly, men and women taking part. This motley group was determined to conquer and meet this challenge. The group was led by experienced youth workers, who had climbed Snowdon many times before and had taken groups, so they knew the tricks of the trade. We held a seminar on how to prepare, so as to be safe on the Mountain and to meet the challenge successfully. However, nothing can really prepare you adequately for a mountain trek as the weather changes so rapidly and drastically without any notice.

As we set-off from the base, the car park where our coach was parked, we were full of energy and anticipation of reaching the summit. I looked up and there in the distance stood the sun-kissed mountain peak now covered with mist and concealed by the clouds, this was simply spellbinding, I felt totally free, feeling giddy with joy.

Here are some of the lessons that I learnt as we went on this steep path, the pangs of pain on the uphill journey, the puffing and the panting something of the meaning of life as a steep path.

As the slope became steeper my legs ached and I wondered why I was here, what was I doing here? Isn’t this sadistic? My heart rate rising quickly, not the usual 70 bpm, but 100 beats per minute. It was difficult to sustain this heart rate over the steeper stretches of the steep path. In some places it is anything but a walk in the beautiful scenic National Park, sometimes it felt like I’m not going to make it. It seems that to climb up a mountain one has to be good at several aspects of performance; the biomechanics, the mental, nutritional, psychological and motivational aspects. It is not just fitness but the mental attitude that is so vital.

One of the reasons why our leg muscles feel serious excruciating pain is the accumulation of lactic acid. This is one of the by-products of metabolism and when it reaches a certain level in the blood it creates this pain and this is what is known as the anaerobic metabolism without oxygen. There isn’t enough oxygen getting to the muscles and therefore if there is too much lactic acid the muscles don’t contract causing pain. The trick of endurance sports is to become deaf to the bodies aches,  pains and discomforts. This total experience of discomfort in many ways symbolises what life is, there are times when it is like that and we asked why are we doing this. This is hard like life but seems to be a real struggle sometimes. Reminding me that life too is a struggle and full of challenges. It’s not a bed of roses.

People have climbed mount Snowdon for hundreds of years and as a consequence, there is a well-trodden path, which winds and meanders all the way to the top, it’s worn out in some places and there were potholes in other places, it’s extremely dangerous. Hundreds of people hike on Snowdon daily, making it a very busy place. The human traffic, people going up and down makes a real spectacle of this glorious and scenic mountain. I wondered what would happen if I was to start my own path to the summit would I make it or not? This explained to me the meaning of the word Shari’ah “the well-trodden path to the waterhole”, as a Muslim I am expected to walk and live on a path that has been used by countless human beings from the time of Adam to Jesus to our beloved Prophet Muhammad (peace be upon him).

Travelling with a group

The guide had instructed us to stay in our groups and not to wander off. However, it was very difficult to stay with the group since there were fast, fit, young people and less fast and less healthy, older people, so naturally people drifted away from one another. I was no exception. Near the top, it was misty, foggy and the steepness could be felt by my knees and completely oblivious of my companions I drifted off the path and took a wrong turn since I saw some people coming from that direction, I thought that was the right way. However, after walking 500 metres all by myself, there was no one around me, in the fog where I could not see beyond 30 metres, fear crept in. I began to get suspicious. I knew I was wrong and I had gone astray. So, I turned back tracing my footsteps and I reached the original path. The lesson here was obvious, don’t go away from the trodden path by yourself and always stay with the group. Our master and Prophet (peace be upon him) taught us to be with a group “whoever strays away from the flock, will be eaten by the Wolf and whoever splits from the group will end up in hellfire”.

Preparation is of utmost importance, the right gear, waterproof jackets and trousers, strong walking boots, a walking stick, supply of food and water and not to forget the mobile phone. Another important element of preparation is physical fitness and how much walking one has undertaken in previous weeks in order to make the leg muscles fit for this arduous journey.

At the start of the journey, it was 15°c however, as we got higher and higher the temperature began to fall, near the summit it was raining and the wind was blowing at 40 miles per hour. The temperature was -6°C, couple this with the steep and dangerous potholes and you can imagine what it was like. I realised the importance of warm clothes, a warm hat and strong boots. Had I not been prepared for this it would have been disastrous.

There’s no joy of achievement without friends

After three hours of struggle and pain, I finally reached the peak. I was finally at the summit! There were many other people there, the wind was really blustery and I felt I was going to be blown over the ridge as I slowly and tiredly made my way up the steps to the summit. I looked around but could not see a single face that I could recognise. I felt a loss of some kind. My joy turned to a sense of loss, as I could not see any of my friends, there were other people congratulating one another and laughing, but there was no one to welcome or to congratulate me. It dawned on me that there can be no joy of achievement without sharing it with those one knows and loves. This is why the Quran insists that we make sure that in paradise, we are accompanied by our offspring and spouses. When my friends finally arrived I was delighted to see them and welcomed them and congratulated them on their achievement. It was then that I was pleased and I felt that after this I can do anything, a great feeling of strength and resolve to overcome even the most difficult tasks. I didn’t feel like lying down but wanted to continue on and on.