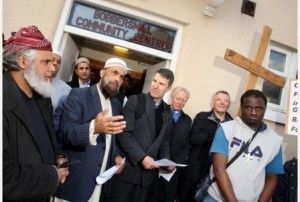 As a British Muslim, I know that all religions teach love, care and to live peacefully and harmoniously with neighbours; they teach tolerance and forgiveness and a deep sense of accountability before a mighty creator. This is expected from their followers, and Islam is no exception. The Islam I learnt certainly taught me this. Religion can easily be abused and violence committed in its name. The atrocities that we witness around the world are not really about Islam but about socio-political and economic issues. I hope that our fellow Brits will be able to dissociate any barbaric attacks from Islam.

Terrorism is a crime like other crimes. By giving it a religious connotation we bestow special status on it, that it does not deserve. Some people make the accusation that “Islam is inherently violent and intolerant”, but this view has no basis; one needs to just look at the teachings of the religion and see that it preaches the common good, human welfare and invites humanity to a loving God.

Another charge against Islam is that it is outdated and in need of Reformation; in other words, make it better by removing errors. Perhaps the kind of Reformation that Christianity went through in the 16th century, where doctrines and practices of the Roman Catholic Church were challenged and led to the formation of many Protestant sects. I believe Islam does not need this kind of Reformation. However, it does need revival. Muslims need to learn and understand true Islam and its beliefs and practices; moreover they must embrace its moral, social and spiritual values. Islamic teachings are flexible enough for all cultures, which is why Islam has spread across the globe from the far East to the depths of central Africa and as far as Moscow and Washington. The five pillars of Islam are non-negotiable, but its other teachings are flexible to make it is suitable for all times and places.

The depiction of the prophet (peace be upon him) in cartoons is unacceptable to Muslims, just as Parisians found the remarks by Fox TV (Nov 2015) about ‘the no-go zones for non-Muslims in Paris’ unacceptable. In fact the mayor of Paris at the time took legal action against them. Why? Because it damages their reputation, it can ruin tourism and community relations. If our cities’ reputations are so vital and sacrosanct, then what is the problem of making a personality that is central to someone’s faith, life and very existence sacrosanct?

I like what Pope Francis said about freedom of speech. He gestured to Alberto Gasparri, one of his aides, and said with a smile, “I believe you cannot react violently, but if Mr Gasparri, my great friend, says a curse word against my mother, he can expect a punch – this is normal. You cannot provoke, you cannot insult other people’s faiths. You cannot make fun of faith. There is a limit”.

As a faith group with great internal diversity we must build strong connections with other communities. The Karimia Institute is working with local churches, schools and other organisations. Although these are mostly internal networks, we are gradually developing more structured links. For example, the St. Steven’s church, the URC on Gregory Boulevard and our mosque have formed an organisation called ‘Faiths in Action’. The aim is to better understand one another and eliminate discrimination of all kinds. It also aims to build alliances, mediate over conflicts and ensure that a regular dialogue is continued over a range of different issues. We need more contact, formal and informal with other communities, as this will reduce mutual ignorance and hostility. Muslims have to diminish the fears of wider society. How? Better relations with neighbours. But more importantly, better public relations through well trained spokespersons.