This is a tribute to my teacher, my Shaykh and my mentor. May Allah raise their station to the highest in Jannah. 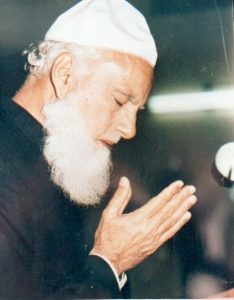 Pir Muhammad Karam Shah widely known as Zia-ul-Ummat (Luminary of the nation) was born on 1st July 1918 in Bhera district, Sargouda. After completing their secondary education and graduation from Islamic education in his home town, he went to study in Oriental college, Lahore. In 1943, he travelled to Moradabad in India. Here under the supervision of Maulana Naeem Uddin he studied the science of Hadith. His illustrious teacher awarded him the certificate to teach hadith, this is the highest qualification in traditional Madrassah’s. Maulana once praised his young student in these words “Today I am satisfied that I have handed over the trust to the right person“.

The young scholar returned home to Bhera with flying colours and had chosen as his vocation service to Islam. However his father Pir Muhammad Shah (may Allah bless him) urged his bright son to continue his education in Al-Azhar University, Egypt. As an obedient son he embarked on his journey to Egypt in 1951. Here he joined the postgraduate course in Islamic Shariah and Law.

In 1957 after the death of his father, Pir Muhammad Karam Shah took on the responsibilities of the Khanqah (place for spiritual retreat) and the Madrassah. He proved himself to be a highly capable administrator, a brilliant teacher and an eminent scholar. He had a vision, he wanted to make education his primary concern. To establish an educational institute that would produce religious scholars, Imams, teachers all dedicated to the cause of Islam. This is how he saw things in Pakistan:

“After completing my education, I looked around and found a disturbing situation. I saw that the burning lamps of Islamic civilisation and culture were being extinguished one by one by the storms of the West. The bright colourful flowers, which were decorating the garden of Islam were wilting. Whatever the Muslims were able to save from the attacks of capitalism were now under attack from socialism, which wanted to pull out the roots of love of the prophet (peace be upon him) and Islam from the Muslims. These were external threats, which surrounded the Ummah from all sides. Had the internal situation been any better we could hope to face these external threats successfully. However the internal conditions of the Ummah was even more bleak and dangerous. Disunity and sectarianism were ripe.”

The Ahlu-Sunnah-Wal-Jamah, the major group representing the orthodox Sunni’s were in a lamentable state; disorganised, helpless and voiceless. He wanted to do something about the pathetic situation and says “I knew I could not alone alleviate this apathy. In order to connect this situation I needed some comitted people who would support and help me. Such people who could fight the evil forces. Men whose knowledge would be vast and whose character spotless as the sun and whose farsightedness would shake the Stannic world. People who would be hardworking, carers of the poor and the needy.” He passionately believed that through education and right leadership things would improve.

When Pir Muhammad Karam Shah started the college of Arabic and Islamic studies, he was confronted by a multitude of problems; lack of finance, lack of properly trained teachers and lack of parents willing to dedicate their children for Islam. However, more perplexing problems arose about the syllabus. Should he teach the conventional Darse-Nizami (a 300 year old religious syllabus) or devise a new one? Which would better cater for the needs of today? He wisely decided to formulate a modern syllabus, which would incorporate the essential Islamic sciences from the Darse-Nizami:

Students were expected to sit internal exams as well as the state exams. The timescale was eight years to complete the course. The track record of exam success has astonished everyone. The degree awarded by the college is now recognised as a Masters degree by the Punjab University. Pir sahib himself taught Arabic Grammar, Fiqh and Hadith.

For the last fifteen years of his life, he concentrated on teaching Hadith to the final year students. Traditionally, this has been regarded as the most honourable teaching post as Shaykh ul Hadith and is the most coveted post in Muslim seminaries. He was no ordinary teacher, he had a mission to educate and train young men in Islamic sciences. Moreover, to infuse in them the enthusiasm, the zeal and commitment to serve Islam. The maxim that enthusiasm is contagious was clearly evident in his classes. I had the privilege of sitting at the master’s feet during the one year course in Hadith (1991-1992). 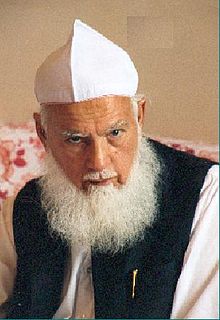 He was 73 years old then but still taught full-time despite having diabetes. He began his day by praying Fajr with the congregation and then having breakfast. From 8:30am till 11:30am he would teach in the girls college, annexed to the main college. Thereafter he would take our Hadith class till 2:30pm. He would read the Hadith and explain it’s meaning, analysing it grammatically and highlighting any moral and spiritual lessons and divulge its literary and grammatical intricacies. All this in beautifully spoken Urdu punctuated with couplets from Rumi’s Mathnavi, or Hafiz Shiraz’s Gulistan or Urdu couplets from Iqbal who he admired enormously. Hearts were moved and tear glands stimulated. Since the spoken words came from a sincere and loving heart, they entered straight into the hearts! His encyclopedic knowledge coupled with the divine love created a special atmosphere in the classroom, which captivated the hearts and minds of his students.

Another distinguishing feature of his teaching was that he didn’t stop at just imparting knowledge and information but further urged the students to apply it in their lives. Encouraging them and spurring them to become the guardians of Islam. Emphasising the importance of sincerity that is freeing of intentions from all impurities to please Allah. He would also dwell on tawakkul, trust in Allah and having complete reliance on him. Instructing the future religious leaders of the Muslims, he would say “Allah is your greatest supporter, You must put trust in him.”

He always urged his students to follow the Sunnah. Himself, he was an exemplary role model of a devout Muslim, a dynamic and energetic Mujahid. He inspired his students, friends and Mureeds with love for Islam. Pir Karam Shah was not only a brilliant teacher but a benevolent spiritual director. The aim of his teaching programme was to produce people dedicated to Allah and to serve the Muslims. This is a far cry from the modern seats of learning, where only the intellect is developed but the soul is left untouched and aping. It’s no wonder that brought students from all over Pakistan to his college. To cater for these growing needs so far twenty-five branches of the college have been opened country-wide, where more than 3500 students are studying the Deen of Islam fulltime. Inspired by this charisma, devotional life and enthusiasm, many of his students have established Mosques, Madrassah’s and Schools not only in Pakistan but in other places including Britain, Norway, France, Italy, America, Canada and several African and Middle Eastern countries.

Writing books has always been one of the fruitful activities of Muslim scholars for promoting knowledge and scholarship. Pir sahib has written numerous books in Urdu and essays on variety of topics. His articles have appeared in different journals and in Zia-e-Haram in particular. This is a monthly magazine which Pir sahib started publishing in 1970 and it has since been serving an important purpose. Its editorial often highly political represented the voice of the serious and enlightened Muslims of Pakistan and therefore acts as a reminder to the secularist authorities and socialists that they must tread carefully.

In 1977, during the Nizam-e-Mustafa movement he wrote and spoke vehemently against Bhutto’s socialist regime and was consequently imprisoned. He started writing a commentary of the Quran in 1960 and this commentary Zia-ul-Quran was completed in 1979. This is in 5 volumes and spread over 3600 pages. It is written in beautiful literary Urdu. The translation of the Quran is near literal yet flows in Urdu idiom conveying the true sense of the majestic book. He cites all the famous commentaries like Tabari, Qurtabie, Ibn-Kathir, Kashaf of Zarnakhshari Baidawi and Roohul Ma’ani as well as using most authentic lexicons like Mufridat of Raghib and Lisnul Arab.

However his magnum opus must be Zia-un-Nabi. This is a book on the life of the blessed Prophet (peace be upon him), which is approximately four thousand pages in seven volumes. It is written in poetical and fluent Urdu, which is full of passion. It represents a successful combination of scholarly information with literary style. Covering every aspect of the greatest man’s (peace be upon him) life in depth based on original Arabic sources. The loving aspect of the biography is an outstanding feature of this book. The reader is infused with the love of the Prophet (peace be upon him), which flows from every page of this magnificent book.

Civilian societies and various governments have honoured Pir Sahib’s service to Islam. The government of Pakistan awarded him the Sitara lmtiaz (Star of distinction), Al-Azhar University honoured him with a gold medallion in 1993. He served on various government bodies as well as being the judge on the Shariah bench of the supreme court. Apart from being the head of the great Chishti order with thousands of Mureeds and hundreds of scholars, teachers and Imams, he was a simple man. He lived in a small room next to the library situated in the centre of the college, he never ate from the langer (free meals). His meals came from his home, which was a hundred yards from the college. Furthermore, he never took a salary from the college. He lived off his inherited 100 acre estate. Undoubtedly he was an example of a true Muslim. He died on the 7th of April (10th Dhul Hijjah) l998 in Islamabad. Thus set the sun, which had been shining for nearly half a century; teaching, preaching and writing Quran and Hadith.

Abu Zuhra, one of the renowned professors of Cairo University paid a glowing tribute to his able student, Muhammad Karam Shah on his departure from Al-Azhar in 1954 “My spiritual friend and intelligent student Muhammad Karam Shah. Our first meeting was on the Rahman’s spiritual table when you reminded me of defending and fighting for the truth. I have found you striving to achieve lofty ideals, and far from vanity. After every meeting with you I felt new blessings and found your spirit to be free from the worldly anxieties. My son, you have made me realise that East is not only the place of sunrise but also the place of spiritual horizon. My son, you have made me understand that Muslims are one nation and the distance of countries and cities doesn’t matter in this relationship.“