Building trust between British Muslims and the wider community

The Karimia Institute has been at forefront of tackling extremism and building trust. Dr Emily Knox has been following Karimia’s initiative ‘Trust Building Forum’ and recently published her findings in the Journal of Muslim Minority Affairs. Here is an abridged version of the paper.

Many things have changed in our world since 9/11, but the change in America and Europe has been drastic for 25 million Muslims. Muslims face rising Islamophobia, discrimination and challenges. This has been worsened by the monetary crisis of 2008, the rise in popularity of right wing politics. All this has been further exacerbated by the media. So how do we cope with this new socio-political reality?

There are more than 3 million Muslims in the UK that is 5% of the UK’s population. When your neighbours, politicians, teachers and colleagues at work look at you with suspicion, perhaps regard you as an enemy within, the fifth column. How do you deal with this mistrust? Islamophobia is on the rise, it refers to the hatred of Islam manifested as fear or dislike of Muslims, it’s a malicious form of racism not just religious intolerance. Research shows that there is growing scepticism about British Muslims, more than 60% of people believed there were too many Muslims in their country whilst half of the people report feeling threatened by the presence of Muslims and viewing Islam as an intolerant religion. This growing fear of the other is detrimental for community cohesion, individual relationships with neighbours and very deleterious for health and well-being. On the other hand, Muslims also feel discriminated, unwelcome, and losing out on opportunities within their country. All this has been made worse by the various conflicts in the Muslim countries, terrorist attacks of Al Qaeda, Al Shabab, Boko Haram and ISIL, and further worsened by the lone wolf attacks in European cities by extremists, a turbulent time indeed for Muslims.

The strategy that we have followed over the last 16 years in the UK has been one of building trust, cooperate with the government, work closely with the statutory governing bodies, build relationships with other groups including religious and civic. The aim was to show that we are normal loyal citizens of Britain, who can be trusted. 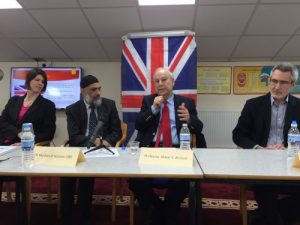 Last year, I invited Professor Akbar Ahmed of Washington University to launch the Trust Building Forum. This initiative aims to build trust through raising awareness about Muslims and to show that we have shared values, address the myths and misconceptions people have of Islam and Muslims. We believe that through raising awareness of British Muslims and presenting a positive image, we can build friendships amongst the Muslims and the wider society. This would promote peace and trust with one’s neighbours, leading to a society that is free from the ‘fear of the other’.

The project aims were operationalised by recruiting and training a group of people, Muslims and non-Muslims who were committed to peace and community cohesion. These people were trained as trust building ambassadors. These trust building ambassadors would visit local organisations from all sectors; public, private and charity. They would deliver a pre-prepared presentation on Islam and Muslims followed by an open question and answer session with the audience.

Dr Emily Knox a researcher at Nottingham University followed these trust building ambassadors in their pursuit of building trust to a variety of audiences. She found that the trust building project achieved its two principal aims:

The Trust Building session consisted of a pre-prepared presentation aimed at increasing knowledge of the Islamic faith and providing a safe environment to ask challenging questions. The contents of the presentation were:

Development and administration of the Questionnaire

To address study aims, ambassadors gave a questionnaire to all attendees at the beginning and end of the presentation. They included the same eight questions on Islamic culture, religion or history. Examples include “Contribution of Muslims to Science is minor” and “Allah is the Arabic name for God”. Three response options were provided: “True”, “False” or “Don’t know”.

Both questionnaires included the same trust item. Likert scales are fixed-choice response designed to measure attitudes or opinions. Participants responded on a 10-point, Likert scale from “I have complete trust in Muslims” (1) to “I very much distrust Muslims” (10). The trust measure was set to be counter-intuitive i.e. the lower the score the higher the level of trust.

This study scientifically demonstrates that the trust building presentation was successful at improving recipients’ knowledge of Islam and building trust between Muslims and the wider community. Improving knowledge has been shown to reduce misconceptions, and trust building as a means to influencing the way we perceive and understand the people around us.

Why Trust deficit is bad for the country?

Research shows that various forms of conflict and injustice arise from lack of trust and that communication and engagement are crucial factors to understanding and facilitating trust, leading to a more peaceful coexistence. Every society is responsible for building trust. Reminiscent of Nazi behaviour, the Srebrenica genocide in 1995 was the worst mass killing in Europe since the Second World War, 8000 Bosnian Muslims men and boys were murdered by Bosnian Serbs in Srebrenica. Mass atrocities do not normally unfold at random but begin with a period of polarisation and attacking a weak perceived enemy who can no longer resist.

The Trust Building initiative aimed to improve knowledge and promote trust, our findings suggest both of these intended aims were met. Given that there has been a rise in hate crimes globally, for example abuse and vandalism at mosques, this work demonstrates that it is feasible for a community-led grassroots initiative to bring about the start of a social movement aimed at reducing fear and mutual suspicion and so combating Islamophobia in the UK. The Trust Building model may also help improve the perception that non-Muslims have of Muslims. This could help to address specific issues such as the troubling finding that some employers discriminate, against Muslim names on job applications. Given that Muslims are estimated to contribute over £31 billion to the economy, there is a significant economic case to ensure British Muslims continue to feel they can participate fully in public life. The Trust Building project is, therefore, essential if Muslims are not to become absent from public life, or increasingly classed as “missing Muslims” as one report suggests.

The growing mistrust between the Muslim and wider community necessitates urgent initiatives to promote trust. Policy-makers and Police commissioners could consider this work as a model for piloting further projects in other towns and cities with a view to future national rollout. The Karimia Institute is currently taking steps to further develop the ‘Trust Building Forum’ to enable users to share experiences and work together on future directions. Future research and projects should focus on building trust within the Muslim community. Muslims are at risk of becoming disenfranchised, looking in from the outside of wider society. Efforts should be made to highlight the positive aspects of living in the UK including British values of fairness and freedom to practice one’s religion, laws to protect against discrimination and the array of social, educational and work opportunities. This may have the potential to reduce or reverse some of the more extreme views that may be held by a minority of Muslims and also offers an alternative option to combatting extremism.

Trust building work is both important and timely. The number of terrorist attacks perpetrated in the UK in 2017 is the highest recorded for the UK in recent history. The rise in islamophobia and related hate crimes necessitates urgent investment in initiatives to redress polarisation of societal views and trust deficits. The present research provides a model that could feasibly be applied to future pilot schemes in other areas with a view to being rolled out at a national level.

Within any society mistrust can cause divisions, which can threaten the stability of the society if not managed. For this reason, trust building is a priority. Strategies such as the trust building forum can increase the capacity of a society to ensure the welfare of individuals, minimise disparities and polarisation, improve civil liberties and support democracy. The UK benefits from an increasingly cultural and ethnically diverse population, but a pitfall is that divisions can spread quickly, particularly in times of threat. Trust building is, therefore, essential in the current UK context.

This is a substantial piece of work, please pass it on to your Councillor and MP as well as religious and community leaders. If you wish to do this kind of work in your locality then please get in touch with the Karimia Institute.