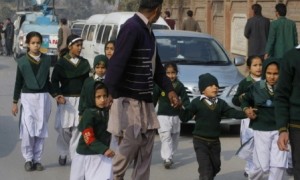 The massacre of children as young as 3 years old and those in their blossoming youth in Peshawar on a sunny morning of 16th December is a tragedy that is horrendous and heinous. Pakistan mourns, Pakistanis all over the world mourn, humanity mourns. Could this be a turning point in the war against the Taliban? Terrorists carry out their shocking acts for ideological reasons and to gain publicity, they are willing to use all means, no matter how barbaric they might be. However, they also have a more sinister motive which is to create division and conflict in the wider society and it is this that Pakistani’s need to be aware of. This is what requires wise leadership that will not let them succeed. The entire country has to show solidarity and unity. This means that we stand together, united against such evil forces that try to divide Pakistani’s and create rift among them. I’m very pleased to say that the Pakistani Prime Minister has succeeded in bringing together diverse and varying parties. Everyone has denounced Taliban’s action as barbaric and unacceptable.

The Roman soldiers in the battle field were an incredible force, they use to form a battlefront like a solid wall because their shields were designed so they could literally be hooked together. Each man fought for his entire line. The Pakistani leadership political, religious, military and secular all need to get together to fight the scourge of the Taliban. The Pakistani military will have to learn to stay on the task until it is accomplished. It must finish the job this time.

The other task the Pakistani leadership has to do is accept responsibility for what is happening in Pakistan rather than blaming others, I know that is not easy, it’s human nature to blame others, it’s far easier to ‘pass the buck ‘. They must adopt an attitude of personal and collective accountability, this is the only way to have control of our destiny and a great future for Pakistan. Stop blaming others!

After the 9/11 terrorist attacks on the Twin Towers in New York the Americans made a serious mistake when they attacked Afghanistan. What has happened over the past 13 years is now history, not something to be proud of but ashamed. It was an act of belligerence, revenge and anger. I pray and hope that the Pakistani government and military will not do the same. Instead it will try to tackle the scourge of the Taliban in a civilised and fair manner. This is a huge challenge, requiring a high level of diplomacy, patience and spirit of peace and reconciliation. How can you talk to a murderous enemy? This is what the Pakistani’s have to contend with.

How to be united?

Unity refers to agreement in beliefs; Harmony in behaviour; unanimity in practice and union in manners. It is the opposite to disarray the state of being confused, panicking and disordered. What does unity look like? A necklace, a rosary, a beautiful rose garden in full blossom, a field of red tulips swaying in the morning breeze or a winning football team, an army marching to drums, the assembly of worshipers.

The glorious Quran lays down a clear strategy for unity it says, “hold firmly to Allah’s rope altogether and do not split into sects” (Al- Imran; 103).

How to hold firmly to rope of Allah?

The prophet (peace be upon him) said “the Quran is a strong rope of Allah… whoever uses it speaks truth, whoever acts on it is guided and whoever holds it will be guided on the straight path” (Tirmazi; 2907).

To achieve unity Pakistani’s must do 3 H’s dialogue!

Pakistan is a diverse, plural and young country, the Punjabi’s, Patan’s, Sindhi’s, Kashmir’s and Baluchi’s are all wonderful Pakistani’s. Their distinct languages, cultures, histories and achievements are unique yet all share the same faith, same constitution of Islam. They must be united by carrying out the 3 H’s dialogue.

Peace and security through unity

Pakistan faces many challenges; corruption, political and economic. However, the biggest challenge is peace and security. Amongst the religious groups there are political agitators who appeal with crude oratory to the prejudice and passions of the mob. We are all familiar with such inflammatory preachers of hate among Pakistani’s, we pray that they restrain themselves.

Dream about prosperous, peaceful and a progressive Pakistan

Here is a dream that I think we all have about Pakistan. Where people of different religions and cultures; the Punjabi’s, Patan’s, Sindhi’s, Kashmir’s and Baluchi’s live and work together. They are open and willing to share their ideas, resources, vision and commitment for a better future. All united in search for a prosperous Pakistan.

In this dream, people are sharing everything: skills, knowledge, talents and prayer in love and friendship. People are really helping one another because they know they will never survive as a thriving country unless everyone is united.

In this dream I see there are no rich and poor – only richness of being, people live inspired and productive lives, the love of Allah, His Messenger and His people. I see a Pakistan without violence and hatred, here people are busy doing good. Let us all pray for the realisation of this dream, ‘O most kind and gracious Lord, give peace to Pakistan’.