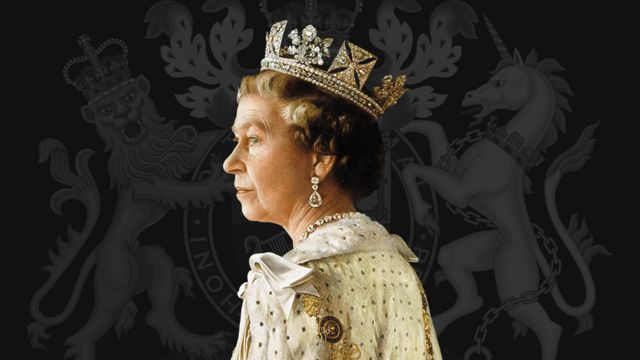 The longest reigning British monarch, Queen Elizabeth the second passed away on 8th September at her home in Balmoral Scotland. “We belong to Allah, to Him we are all returning” (Al-Baqarah: 156). Over the last seven days, we have seen an outpouring of grief, a show of reverence and a sense of loss that these islands have not witnessed. This was the Queen not only of the throne but hearts and minds. A mother, a sovereign, a kingmaker of the highest integrity, who fulfilled her promise of serving her people sincerely.

The Muslim tradition is to pay tribute to the dead, remember their good works and praise them with kind words. If they are Muslims, then you pray for their forgiveness too. Poets, scholars and writers would compose eulogies to express their sorrow, gratitude and homage. In Arabic Madeeh and Marsiya in Urdu are well-developed genres of poetry. It is regarded as thanking Allah for the remarkable life of the deceased. I am no poet nor capable of writing a eulogy for the late Queen, so I have gathered a fragrant bouquet, a colourful collage, from the tribute of King Charles, the poet Laurette, and the general secretary of the Commonwealth.

Sir John Peace the Lord Lieutenant of Nottinghamshire and chancellor of Nottingham Trent university visited Karimia Institute on Tuesday 13th September. He met Muslim leaders, who paid their tributes to the late Queen and then we gave a bouquet of flowers to Sir John. In this photo, Sir John is laying the flowers on behalf of the Nottingham Muslims. 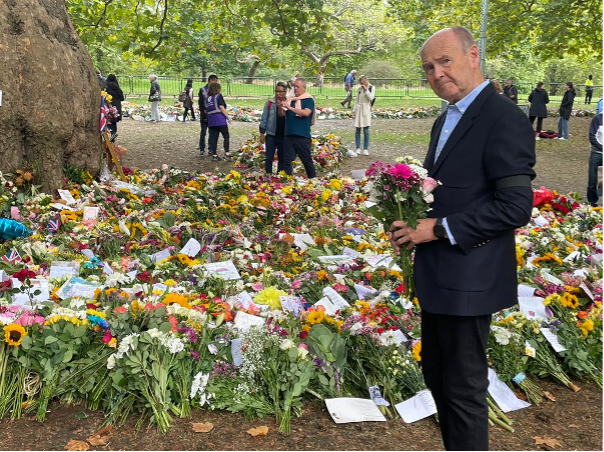 She spoke little but when she said something it was weighty, meaningful and profound, enjoy this anthology of her wisdom.

“It’s often the small steps, not the giant leaps, that bring about the most lasting change” (Queen’s Christmas speech, 2019).

“Through the many changes I have seen over the years, faith, family and friendship have been not only a constant for me but a source of personal comfort and reassurance” (Queen’s Christmas speech, 2018).

“When life seems hard, the courageous do not lie down and accept defeat; instead, they are all the more determined to struggle for a better future” (Queen’s Christmas speech, 2008).

“I declare before you all that my whole life, whether it be long or short, shall be devoted to your service” (Queen’s speech on her 21st birthday, 1947).

King Charles III expressed his personal sorrow, he addressed her as “darling mama”. He said, “Queen Elizabeth was a life well lived, a promise she kept and she is mourned most deeply in her passing.”

Evening will come, however determined the late afternoon,
Limes and oaks in their last green flush, pearled in September mist.
I have conjured a lily to light these hours, a token of thanks,
Zones and auras of soft glare framing the brilliant globes.
A promise made and kept for life – that was your gift –
Because of which, here is a gift in return, glove wort to some,
Each shining bonnet guarded by stern lance-like leaves.
The country loaded its whole self into your slender hands,
Hands that can rest, now, relieved of a century’s weight.
Evening has come. Rain on the black lochs and dark Munros.
Lily of the Valley, a namesake almost, a favourite flower
Interlaced with your famous bouquets, the restrained
Zeal and forceful grace of its lanterns, each inflorescence
A silent bell disguising a singular voice. A blurred new day
Breaks uncrowned on remote peaks and public parks, and
Everything turns on these luminous petals and deep roots,
This lily that thrives between spire and tree, whose brightness
Holds and glows beyond the life and border of its bloom.

A tribute from the Commonwealth

In 1953 Her Majesty defined our family of nations as one that “bears no resemblance to the empires of the past. It is an entirely new conception, built on the highest qualities of the spirit of man; friendship, loyalty and the desire for freedom and peace. To that new conception of an equal partnership of nations and races, I shall give myself heart and soul every day of my life” (Rt Hon Patricia Scotland KC, Secretary-General, Commonwealth of Nations).