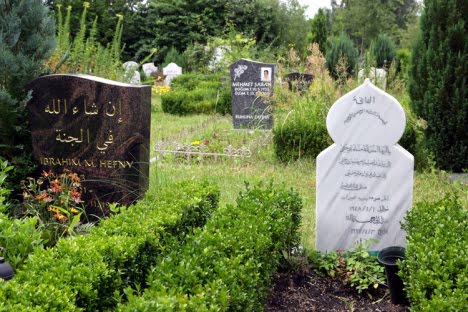 Man consists of body and soul; the body is the physical entity whilst the soul is a spiritual reality and non-material. The two are distinctly different. Imam Suyuti a great fifteenth-century theologian says: “Death is not annihilation and mere extinction but the separation of attachment of the soul from the body, and change of state and the transportation from one house to another” (Sharh u Sudoor). A famous quote about death is “Death is the bridge that unites the lover with his or her beloved”.

What happens after death?

The Prophet (peace be upon him) describes the grave as “either a pit of hellfire or a garden of heaven”. The souls of righteous people will be in bellies of green birds taking them from place to place in paradise then resting under the Divine throne (Muslim). When one of the disciples died the Prophet (peace be upon him) prayed for him. “O Lord! Make his grave spacious for him and brighten it” (Muslim).

A tenth century Muslim scholar Ibn Abi Dunya says, “When a righteous person dies, a bed from paradise is brought for him and he is told to sleep cheerfully and comfortably, for the Lord is happy with you and then his grave is opened for him and he enjoys its beauty, smells its fragrance, his prayers, devotions and good deeds are his companions until the day of judgement” (Shortening long hopes).

The beliefs form the mental framework of a Muslim, these beliefs which are deeply ingrained in the mind help to share a particular attitude to life and death. Death is not viewed as a macabre, gruesome and draconian punishment. It is not the end but a new beginning. Some even regard it as a divine gift. Death, therefore is not a bizarre happening but one of the laws of nature like gravity, theories of dynamics and electromagnetism. It is never ‘untimely’ since death only comes at the fixed time. “Every community has an allotted term, and when their allotted term comes to an end, they can neither delay it by a single hour nor can they hasten it” (Al-Araf: 34).

Upon hearing the news of someone’s death we say, “We belong to Allah and are returning to Him” (Al Baqarah: 156), or very simply “this is the divine will”. This submission to the Divine will and surrendering helps the Muslim not to fight the natural process but accept it. This is beautifully expressed in the funeral prayer of the child. The parents say, “O Lord! Make her a provision, reward and treasure for us in the hereafter, make her our intercessor whose intercession is acceptable”.

The deep searching question is: Is human destiny given by God beyond this worldly life? The question for a Muslim like any other believer is what is that destiny? What is the divine purpose? Our answer is that a Muslim is khalifatullah, the vicegerent of God on earth, the successor on earth. The faith in an afterlife provides hope in divine intervention to recreate the world making it an eternal home for the righteous people. However, this does not guarantee a blissful outcome for all, either in this world or in the world to come.

The idea of eternal blissful life for the righteous after the day of judgement and divine proximity in paradise or separation and punishment in hell are basic articles of Islamic faith. The belief in the afterlife offers a clear meaning and purpose to human life. In this perspective, every individual is the representative of Allah the almighty. This representative of God has endowed with Divine attributes like knowledge capability, mercy and forgiveness. His mission is to acquire the divine colour ‘Sibhgatallah’. Since man has been created with ‘free will’ he is free to submit to his Lord or rebel against him, he therefore will be held accountable on the day of judgement. The inevitability of either bliss or punishment, unpalatable as it may seem to modern man, nevertheless gives mankind dignity that makes them and the way they lead their lives significant. Life becomes a test, a probationary period with a clear purpose and goal.

The Story of Job (peace be upon him)

Let me now turn to question of bearing undeserved suffering, let us begin with the famous story of Job (Ayyub). Job is not only an Old Testament figure but also a legendary figure in Muslim history. Satan speaking to God claims that Job who is faithful to God in prosperity will not be faithful when he faces adversity. God allows Satan to test Job by destroying his property, by killing his livestock and members of his family and then afflicting him with a painful and relentless disease, so that all apart from his wife abandon him. Satan attempts to make Job waver in his faithfulness to God through his wife. Playing on her pity for him in his misery, he persuades her to urge him to sacrifice a child to Satan. Job realises that she has allowed herself to be taken in by Satan. In anguish, he cries out to God, “Satan has wreaked sorrow and torment on me” (Saad: 41).

Job’s faith shines out and despite this most difficult test he does not question God’s wisdom and finally, God hears him, relieves him of his illness, with a spring of water. He restores to him his family and livestock. Once again Job is healthy, wealthy and a prosperous man. God makes Job’s patience and endurance a lesson for “those with understanding”. The closing statement is a Divine accolade for the patient Job “We found him to be patient. What a wonderful servant! So devout” (Saad: 44).

Why Does God afflict us? Why take my child away from me? Why me? Are natural questions. The Muslims tried to explain these in a variety of ways. Here I have selected some common responses to this perennial enigma. I will be looking at this with the laws of belief.

Life is a big test

This is one of the reoccurring themes of the Quran. Repeated many times to emphasise the fact that a Muslim reconciles himself with that fact straight away, and not waste time commiserating on the loss. The Quran teaches, “We will certainly test you: with fear, hunger, loss of wealth, health and harvests. Give good news to the patient” (Al-Baqarah: 155).

We may well ask what is the point of God testing mankind? Tests are an inevitable part of our lives. The objective of life, therefore, is not to avoid or deny its tests rather courageously face them and ultimately pass them with flying colours. The Quran again asks, “Do people think that they will be left alone once they’ve declared, “We believe”, then will not be tested?” (Ankabut: 2). Thus making it clear that the worldly life will not be a rose garden, a smooth ride but quite a bumpy one!

Muslim sages have tried to rationalise these tests and trials of life by looking at them as a means of our personal growth and development. They make us strong; they make us patient and increase the capacity of enduring. Many people think that tests from God are a sign of Divine wrath. However, Muslims believe that the trials afflicting us can be signs of His love. The Messenger (peace be upon him) said, “When God loves people, He tests them. Whoever is content will have the divine pleasure and whoever is displeased will have Divine wrath” (Tirmidhi). These teachings spur and motivate Muslims to boldly face the tests and challenges of life and to remain content with Divine will. Thus the sufferings are not meaningless but means for bettering ourselves.

Can this religious philosophical framework adequately explain the death of a child to a bereaved mother? My answer is yes. Muslims will be just as sad to lose their loved one as anyone else, however they would not be hysterical or have suicidal despair. The attitude is one of truthful acceptance. Such reasoning coupled with deep faith in God’s benevolence does help many from despair. It gives meaning to life and shows it’s mysterious but under the control of the all-powerful Lord.

Muslims put their trust in God, they completely rely on him. This helps them to surrender to the Divine will and thereby accept dying as a natural process. This opens up a new relationship between man and God and therefore one does not struggle against death. The Islamic prayers, the stories of the past great teachers who went through hardships are extremely consoling. This gives courage and confidence in oneself. Thus the whole experience of dying, fear, sadness and anger can be turned into a positive experience by these scriptural teachings. In order to prepare this peculiar and strong mental framework towards death and suffering, Islam has laid great emphasis on two things: Patience and hope.