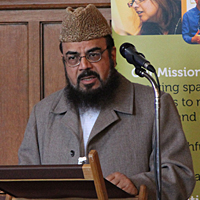 In the new year honours list 2008 maulana Shahid raza chief imam of central mosque Leicester was awarded OBE. The Karimia institute organised a dinner to celebrate his title with his family and friends. Dr. Musharraf Hussain paid this tribute for his distinguished and outstanding services to the British Muslims. An exemplary imam who has served his mosque and community for nearly 30 years. To serve for so long in one mosque is no less than a miracle in Britain where committees rule with iron fists and where sadly autocratic rule still holds sway. Where the challenge for an imam is to maintain a balance of being a spirtual guide and an employee of the mosque committee. This tribute also reflects that committee of central mosque Leicester has been successful in working with a competent imam.congratulations to both.

He started his career as a teacher of Arabic and Islamic sciences, at Jamia Naimia, Muradabad from where he had graduated in 1976.This is regarded as a springboard on to the career ladder of becoming a scholar and religious leader Perhaps his father had already seen signs of excellence and leadership in his beloved son. Amongst his illustrious teachers were the following: his father an eminent teacher, Mufti Muhammad Habib ullah Naeemi; Mufti Muhammad Yunus, Maulana Muhammad Ayyub. In 1978 he was invited as an imam to lead the Islamic centre in Sutherland Street Leicester.

Since coming to britain his mentors have been Allama Qamar u Ziman Azmi a prominent British scholar and Late sir Zaki Badawi. Who spotted maulanas talents and called on him to to undertake new and larger tasks at the Muslim college. An institution he had established to train imams. In 1990 he took up his post of lecturing Islamic personal law. He had the task of running the newly set up Shariah council which helps distressed women seeking divorce. This was one of the first major sharia council and annually deals with some 400 cases.

Being an Imam is one of the most demanding jobs, there’s many responsibilities, including leading the five daily prayers, teaching children, supervising part time Quranic tutors, khatams and Dua’s, pastoral care of the community, keeping contact with the community by visiting the sick, paying condolences to the bereaved; there are lots of other outside demands on the time of the busy imam – like interfaith meetings, liasing with other public sector bodies, police, social workers, voluntary organisations and schools and colleges. One of the challenges of being an imam is maintaining working relationships with mosque committees.

Maulana Shahid Raza has been very successful. Maulana Shahid has been very active over the years with interfaith work. He is a consultant to the “Three faiths forum” and member of the executive council of the “Interfaith Network UK”. All this takes a lot of time and effort. One of his friends Sheikh Ibrahim Mogra perhaps reveals the secret of his success in interfaith work when he describes him as “a thoughtful person who speaks after carefully thinking through every issue – he takes long pauses and then gives his measured and insightful opinion”. He also admires his “openness and willingness to embrace others” he tells his first encounter with Maulana – I visited him one day to discuss the iftari time, since each mosque in Leicester had its own different time – I wanted them to agree on one time, when I made this suggestion Maulana commended me and said “this should have been done long ago – you have my full support” – sheikh Mogra says this was a great encouragement for me.

Another of his colleague Maulana Ghulam Jilani (chief Imam High Wycombe) pays tribute to Maulana Shahid in these glowing words “Amongst his many personal qualities is his ability to remain above group politics and consequently he is respected by all”.

He has represented the Ahle Sunnah people on their bodies admirably for which we are most grateful to him. Imams like Maulana Shahid are not just role models for their congregation and mosque community but for other imams as well. Such examples strengthen us all and are an inspiration. In an age where there is ignorance amongst Muslims and fear of Islam in non-Muslims, people like Maulana Shahid are a breath of fresh air. Such people of deep knowledge, profound thinking and vast experience are desperately needed to lead. Maulana’s spiritual and eagerness to present the peace-loving message of Islam comes from the teachers who nurtured him.

Allah praises scholars, people of knowledge and vision when he says “surely the people who really fear Allah are the scholars” (Quran).

The responsibility of learning thoroughly the teachings of Islam and then teaching them to the community has assumed a special significance in British society. Young people in particular need to be guided and taught. The prophet praised such imams “the best amongst you is the one who learns and teaches the glorious Quran”.

The great prophet Abraham is called Imam – Allah says “and remember that Abraham was tried by his lord through certain trials and told I will make you an imam” (2: 124).

Imam means (1) leader in religion (2) leader in congregational prayers (3) model, pattern, and example. In Surah Bani Israel it says “on that day we shall call together all people with their respective imams” (17:71).

Some commentators understand the meaning to be that each person or group will appear with its leaders who will bear witness to their virtues or sins.

The imam traditionally has been someone who has dedicated his life to devotion and serving the people of God. By meticulously following the example of the beloved messenger in the minutist detail the imam tries to walk the Muhammadan path. Thereby becoming a model to be emulated. The glory of Islam that remains today is a result of efforts of such imams.

Traditionally a sheikh is a person who has studied at the feet of a teacher, lives and practices the pristine and beautiful way of life, and become an imam or a teacher of that way by his own example and teachings to students. Maulana was influenced by

his spiritual guide pir syed Mukhtar Ashraf Jilani and he in turn is inspiring hundreds of people, through his own example. I took one of his students down the memory lane and he said “Maulana was an outstanding teacher and hugely admired by the mosque student, just as he is respected and trusted by his Namazi’s” (personal communication Ayyub Raja).

Maulana Shahid is the national religious leader of the Ahle Sunnah who has worked tirelessly to serve Allah and the Ummah of Muhammad (saw). I wonder how many times he has been criticised by people, how many times let down by friends and how many perils he had to face – but his patience and reliance in Allah has been his constant support. The extraordinary work and leadership he has given to his local community and the British Muslims nationally is remarkable. Central mosque Leicester and its people would not be where they are but for Maulanas wisdom and diplomacy.

Allah will honour the Imams

People who sincerely serve Allah and his religion are blessed and selected and chosen ones. The beloved Mustafa said ”when Allah wants to bless someone he gives him the understanding of religion” (Bukhari).

In another Hadith he said “true respect of Allah depends on respecting the elderly, the scholar and the just ruler” (Abu Dawud).

Through Dars e Quran, Dars e Hadith and Friday sermons the imam tries to teach the divine knowledge, love of god and his beautiful messenger. Over the past 3 decades Maulana has been giving weekly Darse Quran on Sundays. He is a powerful Urdu orator – his Urdu speeches are loved by listeners for both clarity of their message and the beauty of his strong melodious voice. He often challenges the audience to reflect on the condition of the Ummah and search for solutions to its problems. “Love of the messenger” his favourite themes of his speeches; using eloquent and poetic language he portrays the greatness of the Messenger, describing the beauty of his Sublime character and the rationality of his Message. The cushioned Islam of mosques which is quietist and disengaged from the wider society has always been challenged by Maulana. He knows only too well that the tectonic plates beneath the twenty first century Islam are moving fast. What can an imam do In a world of moral chaos ,cynacism and rapidly spreading consumerism ?His response has been through his deep faith and the need for humanity to once more turn to the Eternal Lord.

Maulana has been working within the Muslim community as Imam, teacher, leader, social commentator and sharia counseller and mufti for many years, this wealth of knowledge and experience has been distilled in his book “Islam and Muslims in Britain”. This has been through two editions and has been translated in Persian and Malaysian as well. He has written many articles on a variety of subject: fiqh, respect for parent, Islam and HIV/AIDs etc. Maulana is a visionary leader and a down to earth person ,there is no bluffing here. The beleagured and dysfunctional sunni fraternity desperately needs his guidance. Its heartening to see that British Muslim forum is listening to him. We eagrly await to see how Maulana will lead. Finally we pray for his health,longevity and wisdom. May he continue serving the community.