Why is it good that Anjem is finally put in jail? 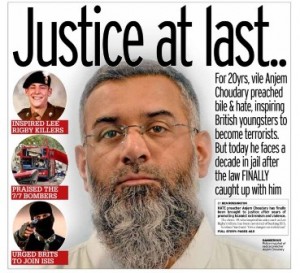 Many of us were relieved when we heard that the 49-year-old Anjem Choudary, the hate promoter and extremist who spent two decades radicalising a generation of would-be terrorists, was finally convicted this week after swearing an oath of allegiance to Daesh. He was the leader of the Al-Muhajiroun an extremist organisation that is now banned. Since 2000 he has been linked to 15 terror plots. It is interesting to note that the Muslims had long ago kicked him out of the mosques and would not give him any platform. But Choudary was constantly flattered, and regularly given the oxygen of publicity by the media. Therefore, he had impact through the media in recruiting gullible followers, Keith Vaz MP was right when he said, “In future we need to show zero tolerance to those who act and behave in this way”. Choudary’s infamy allowed him to reach the impressionable and young, vulnerable and alienated people who were the most gullible targets of the bigot. Possibly hundreds were inspired by him to commit terrorism here and abroad. Many more were poisoned by his hate filled rhetoric.

The lesson for us all and the media in particular is to ensure that we do not glamorise hate preachers. These firebrands have no place in our society let alone being the representatives of Muslims. Home Secretary Amber Rudd said: “These dangerous individuals were recruiting sergeants for Daesh. They poisoned the minds of vulnerable people and their warped and twisted propaganda offered support and succour to a murderous and barbaric terrorist organisation. The Government is clear. We will continue to confront those who promote hate and threaten our way of life. Together we will protect communities from extremism and defeat this toxic ideology”.

What did he do wrong?

For 20 years he made every effort to divide and polarise the British Muslims against the rest of Britain. He provoked the public and the authorities with inflammatory comments and deliberate provocative statements. He refused to condemn the 7/7 bombings, demanded the imposition of Sharia across Britain, once called for the Queen to wear a burka, he also said, “The flag of Islam will fly over Downing Street”, “The Muslims are rising to establish the Sharia… Pakistan, Afghanistan and perhaps, my dear Muslims, Londonistan”. Commander Dean Haydon, head of the Met’s counter terrorism command described Choudary as a “very dangerous and clever individual” who had played a key role in recruiting some of the 850 Britons who are currently fighting for Daesh in Syria. How different was his message from the Prophet’s (peace be upon him) attempts to unite communities?

I believe his other crime was misrepresenting the religion of Islam, which begins with kindness and ends with peace. Choudary’s warped mind saw everything in binaries, dichotomies and black and white. He believed only in two worlds – the world of Islam and the world of Kafirs (the disbelievers). A world of perpetual confrontations, never ending wars where us and them are at each other’s throats. As though he was trying to live Huntington’s clash of civilisations. Such distorted thinking leaves no room for the other to compromise and no space for dialogue and exchange of ideas. That is why he could not accept democracy, personal freedom, or the rule of the law.

His simple minded solution to all this was Daesh, repugnant terrorists, a bunch of evil warlords and if you happen to disagree with him you are the enemy. It is this kind of narrow mindedness, extremism and bigotry that creates polarisation between different religions and communities. However, the bad news for people like Anjem is that the vast majority of human beings do not think in that way and certainly not the Muslims nor the gracious and loving God of the Muslims.

Today we see a dread and fear of the Muslims among our fellow Brits, this is the direct result of his rabble-rousing remarks. He refused to condemn atrocities like the 9/11, why? Because it would be seen as supporting the Kuffar (disbelievers) and the infidels. So there was a tacit approval of violence and terrorism behind closed doors.

What British Muslims must do post-Anjem?

The Muslim civil society must actively work to overcome the negative impact of Anjem’s two decades of evil rants and provocation; we need to show that we stand for the common good, to achieve this we will play our role as: