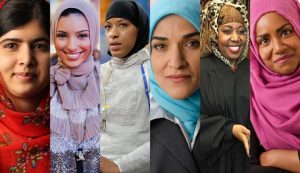 The Socialist party of America first celebrated the Women’s Day in 1909 in New York. United Nations officially adopted International Women’s Day in 1975. The main purpose of this day is to highlight the discrimination, violence and lack of opportunities for women. The agenda is to influence policy makers all over the world to be fair and just towards women. The United Nations has been holding conferences on this occasion and the following  shows the themes of some of these conferences.

List of conferences: Celebrating the Past, Planning for the Future

Islam is a religion, a way of life and gave us a powerful and effective way for transforming our lives.It gives us instructions, guidelines and very clear rules about how to live a successful life here on Earth and about wonderful the consequences would be in the hereafter. It is for men and women, for all humanity without gender discrimination. I have just completed writing the new translation of the Majestic Quran in plain English and over the last four years I have not come across a single verse, a phrase or even a word that in any way discriminates against women. This is no surprise because the one who revealed this is Allah, the creator of men and women, the one who sustains, cares and guides humanity.

The most oft-repeated name of Allah is the kind, and the caring. We always begin our activities with this beautiful formula. The mission of the blessed messenger (peace be upon him) is highlighted as “we sent you as source of kindness for entire humanity” (Anbiya: 107). The glorious is also described as “a healing to the spiritual illnesses of the hearts, guidance and source of kindness” (Yunus: 57). One of the greats scholars of the 11th century Imam Ghazzali wrote about the five objectives of Islamic Shariah, he made no distinction about men and women, because the teachings of Islam apply to both. He said the purpose of Shariah is the protection of a person’s:

The misconceptions about the status of women in Islam

It is unfortunate that whilst Islam give women equal rights, equal status with men and the right to pursue spiritual development and acquired defining proximity. Muslim cultures unfortunately did not always honour this, so we see a big disparity between the teachings of Islam on one hand and the cultures in Muslim countries, which are overwhelmingly patriarchal. This is a classical example of the gap between the principles of Islam and the practices of Muslim societies. One of the major reasons for Islamophobia, the dread and fear of Islam, is based on the misconception that Islam is unfair to women, discriminatory, violent and therefore a backward religion.

In the seventh century when the Quran was revealed, women had very few rights, however the Quran made it absolutely clear that in the sight of the Lord women were equal in terms of their reward and their ability to acquire Divine proximity and to be His representative on Earth. For the first time in human history women were given the right of ownership, owning property, marriage could not take place without their permission and they had the right to inheritance. Women regularly attended the congregational prayer in the Prophet’s masjid in Madinah, in fact one third of the congregation consisted of women.

Some of the issues about Muslim women like the hijab has been misunderstood, the prime purpose is to protect women as well as men. The wearing of decent clocks is an important safeguard against sexual perversity and promiscuity. The preachings on modesty, lowering of the gaze and separation of men and women is clearly to safeguard. The latest revelations in the media about sexual harassment at the workplace bears testimony to the foresight of the Islamic Shariah in preventing the free mixing of sexes that leads to terrible abuse. Islamic law believes in taking preventative measures.

Islam’s holistic approach to the rights of women

The United Nations concern for the rights of women and protecting them against abuse and investing in their development is honourable and indeed something we Muslims would support and work towards, as it is the fulfilment of the teachings of Islam. However, there seems to be an over-emphasis on the material and the economic needs of women but forgetting crucially the moral, social and spiritual needs. This is where Muslims can play a very important part in making this day (International Women’s Day) not just about the outward but the inner development and strengthening of women.

I hope that Muslim women will in the future organise conferences on this day showing that women don’t just need laws to protect them but they need opportunities for their moral and spiritual fulfilment so that their children, the future of human generations can truly flourish.