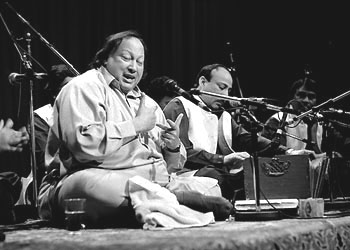 In our post-modern society, music has spread to such an extent that nobody is free from it. We are confronted with situations where we are forced to listen to music. It is played nearly in all department stores and supermarkets. If you sit in a taxi, make a phone call or even walk down the street, you will not be saved from this evil. Young Muslims drive around in their cars with rap music blasting.

I will reply to this question from the response of the great scholar Nizamuddin Auliya. He was a great alim and spiritual guide of his time. His enemies often criticised him particularly for his listening to devotional singing. One day one of his enemies bad-mouthed him and displayed severe hostility. Nizamuddin’s response to all this was to say: “God regards aggressive and harsh people as enemies”.

He then asked the question what comprises listening to devotional songs? He said: there is hearing, what is heard, the hearer and the instrument. He then explained each as follows:

The hearing, the person that is being heard should be a mature man and not a young boy or a woman. The audible, the sound that is heard, the lyrics should not be indecent or shameful. The hearer should only hear to gain Divine nearness only and nothing else. The instruments can be any.

Islam is a natural way of life – according to the fitrah. The human soul yearns for beauty and is ever eager to express that beauty. It wants to see beauty and hear beautiful voices and tunes. Entertainment like singing which comforts the soul, pleases the ear and creates a pleasant and joyous atmosphere is commendable particularly on festive occasions like Eid, wedding parties and birthday parties.

Aisha, the mother of believers narrates an incident where girls were singing. She reports: On the day of Eid ul Adha two girls were with her singing and playing on a hand drum. The Prophet (peace be upon him) was present listening to them. His head was covered under a shawl; Abu Bakr then entered and condemned the girls. The Prophet (peace be upon him) uncovering his face said “Let them play Abu Bakr, these are days of Eid” (Bukhari, Muslim).

Based on this hadith and others the scholars are agreed that music is allowed as long as the following recommendations are observed:

The Messenger of Allah (peace be upon him) warned “some people of my nation will drink wine calling it by another name, while they listen to singers accompanied by musical instruments. Allah with the earth will swallow them and will turn some of them into monkeys and swine” (Ibn Maja).

The Sufi’s (spiritually enlightened group of Muslim Scholars) have successfully used music to spread the teachings of Islam. They recognised the power of inspiration that music has, the way it can effect human emotions and state of mind and body. Music is capable of inspiring lofty ideals, quelling depression and exciting the tear glands. The Military bands can refresh the weary and tired soldier. Music can change moods and thoughts and thus religious music can bring one closer to God.

The Qawwali (religious singing) was initiated by the great Saint Khwaja Moinuddin Chishti in India, in the 6th century after Hijrah. It has such moving tones and lyrics that it moves the serious listener to ecstasy and enriches his spirituality. Qawwali’s were an important instrument in the conversion of thousands of Hindus and this beautiful tradition continues to bring spiritual enlightenment to thousands in the Indo-Pak subcontinent. In North Africa the Sufi’s use music whilst performing Dhikr (the utterance of divine attributes).

Music has a powerful effect on people, it can move one to tears or laughter, it can make one dance with joy. It can also bring one close to Allah. But it can also put a person in the clasps of the devil. This is precisely what the vulgar mainstream pop music does, its contents often frivolous and sexual, the tempo and style and loudness is often offensive. Undoubtedly such addictive and soporific music is Haraam because of its negative influence on the listeners’ emotions and spirituality.