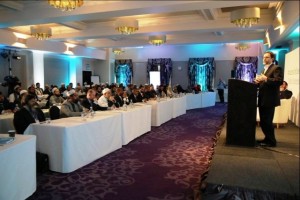 Reflections after attending the Digital Summit organised by Imams online on March 2015 in London, where the keynote speakers were Shaykh Abdullah bin Bayyah and Hamza Yusuf.

In a world governed by powerful political figures, armies of elite civil servant and policy makers, groups of experienced lobbyists, a military with most sophisticated nuclear missiles. It is not surprising that we see so much turmoil and conflict. All this is compounded by a 24 hours media circus that has its own agenda. Is it at all then surprising that people are bewildered, confused and distressed. Perhaps we should take off the bifocals and instead put on glasses with a different lens. Lenses that show moral, social and spiritual goodness. That is what I invite you to do when we look at the problems facing the Muslim world and the wider world. Rather than looking from the short term perspective of the Politician, the Economist or the Journalist let us look at it from the Quranic viewpoint. How would the Prophet (peace be upon him) look at it?

Conflict and human suffering have been part of Muslim history from the earliest times, in time of the first caliph Hazrat Abu Bakr ‘the wars of apostasy’ to the Middle Ages, the Mongols pillaging the Muslim world, and particularly poignant is their invasion of Baghdad in 1256 CE. It appeared then that the Muslims would never recover from this devastation. But it wasn’t long before the brutal invader Genghis Khan’s sons became the champions of Islam. Napoleon attacked Egypt in 1779 and thus began the colonisation of Muslim lands.

The Muslims were deprived of power, but it was not long before they began the struggle for independence. Then in the mid 20th century Muslims achieved freedom and independence that was followed by Arab nationalism and dictatorship that lasted for nearly half a century, this was a response to the powerlessness of Muslims but unfortunately it further repressed the Arab masses.

In the 21st century the so-called Arab spring brought some relief, but it was short lived. This was a new expression of an old historical reality, people hoped to rebalance the equation of loss and victory. It was followed by brutal civil war, a state of anarchy ensued in Libya, Egypt, Syria and Yemen. The cost of human sufferings in these conflicts has been enormous and unimaginable. It goes on abated.

This anarchy and chaotic state in these countries has spawned most ruthless mercenaries and barbaric groups from Taliban to the so-called Islamic state fighters. The so-called Islamic state is now fighting against Iraqi government and in some parts of Syria is perhaps the most disastrous metamorphosis of this Arabs spring. The ideology of the Islamic state, it’s belief systems and behaviour is contrary to the teachings of Islam. The foundations of Islam are love, kindness and caring for humanity, Islam stands for world peace, peace within, peace in the family and the society.

The Prophet (peace be upon him) said ‘the Muslim is the one from whose hands and tongue others are safe and secure’. This is the reality, a Muslim is someone who is trustworthy and people feel safe with him. So what is the best way to look at these crises? I suggest with a metaphysical and spiritual lenses, perhaps it will give us a more sane and realistic picture.

What is the Quranic and spiritual explanation of the crises?

Here are five ideas that might help us to see these crises in a different way and prevent the disenfranchisement, dispossession and alienation of young Muslims: