Why economic success may not bring contentment 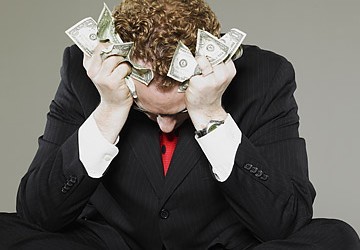 I have taken this title from an essay by Gerd Behrens in Time magazine (July 19, 1999). It is a pithy and incisive analysis of the problem of lack of contentment in the rich countries of the world. After thoroughly reading and inwardly digesting it’s contents, I was soon left with a bad taste. This is very significant, here is a highly articulate modern man capable of accurately analysing the problem but failing miserably to come up with a solution or even a suggestion for a remedy. He is not the only one; read or listen to any modern expert or a politician talking about the social problems: domestic violence, homelessness, crime and justice, poverty etc. You will see what I mean. They will never suggest a solution or, for that matter, look at the root cause. What they are brilliant at is superficial symptomatic treatment. This I believe is the direct consequence of the lack of belief in the Divine, an unwillingness to submit to the way of God, Islam. The blindness of Kufr. Let me illustrate how well Gerd Behrens is able to portray the problem but without Divine help, he is incapable of seeing a simple solution.

In ‘Healthy, wealthy and unhappy’ he illustrates by quoting empirical data that the richer the country the less happy it’s people. Germans being the richest were most miserable whilst the Irish and Portuguese the poorest were the most content. A recent global survey by the Angus Raid Group constructed a Hope index, asking people how optimistic they felt about the future. Again it was found that in the richest countries less people were upbeat about the future, in Germany (per capita Inc. $28,000) only 18% whilst in poorer countries more people were optimistic e.g. Brazil (Per Capita Inc. $4,400) had 64% of the respondents that were optimistic. So, the conclusion is, wealth and happiness are inversely related; the more wealth the less contentment.

At this point the author alludes to a saying of Isa (may Allah be pleased with him) “Man does not live by bread alone”, but quotes him cheaply by not referring to his real title ‘Jesus Christ’ but merely calling him the carpenter of Galilee. Bringing out another aspect of the intolerant nature of the modern enlightened man, his unwillingness to accept anything connected to religion. He then searches for an explanation for this bizarre link between more material wealth and less happiness. He suggests anguish and discontent are taken as a mark of a deep thinker and it’s unthinkable to be an intellectual and happy, a happy intellectual is an oxymoron he concludes.

So the more intellectual the sadder you become, a perverse logic from the Quranic point of view, which tells us that, “the intellectuals are those who remember their Lord” (Ale-Imran: 190) and “in the remembrance of Allah lies contentment and peace” (Raad: 28).

See how ‘modern thinking’ is opposite to the Divine laws. The blessed Messenger (peace be upon him) warned of a time when the Dajjal will literally turn things upside down, good will be seen as wickedness and wickedness will become good. However, we must give credit to the author for being open minded and actually quoting the view of a Congo tribe about the western man’s logic. They call white man “The bat that flies intensely but knows not where to go.” As a commentary he narrates the story of an American businessman and about a Mexican fisherman (who could have been a Muslim). Whilst on a holiday the American businessman watches a fisherman bring in a rather small catch. ‘Why don’t you stay out at sea longer and bring in more fish?’ The American asks. “I like to spend my time playing with my children, having siesta, playing my guitar with my friends,” the Mexican answers. “If you worked harder you could buy a second boat, then a whole fleet you could head up a large corporation, move to New York and list it on Wall Street. Eventually you could sell your stock and become very rich,” advises the American. “And then Senor?” the fisherman said, “then you retire. You move to a Mexican fishing village. You take a siesta, play with your children….” This is the end of Gerd Behrens essay.

The Glorious Quran tells us: “Grasp the reality that the life of the world is but a play, amusement, decoration piece, vanity and the desire for more wealth and children. It is like the timely rain which the farmer likes since it leads to growth of vegetation which eventually dries, turns yellow and withers away” (Hadeed: 20).

The reality of the worldly life, its material wealth is put into a perspective, it is ephemeral, fleeting and will soon perish and what will remain is the Majesty of the Countenance of the Lord. “O People!” warns the Quran, “The promise of Allah is true and don’t be fooled by the life of the world” (Luqman: 33).

Don’t be dazzled by its glitter, attraction, sweet taste, soft touch and beguiling looks, it is perishable. “And whoever protects himself from greed will be the successful” (Hasher: 9).

The Quran by making man realise the transitory nature of worldly life advises him not to fall in love with it. “Wealth is to be kept in the pocket not in the heart” said Sheikh Abdul Qader Jilani. By adopting this view about wealth, man can hope to be happy.