“Those who struggle hard for Our sake, We will show them many ways to overcome difficulties” [Ankabut: 69] 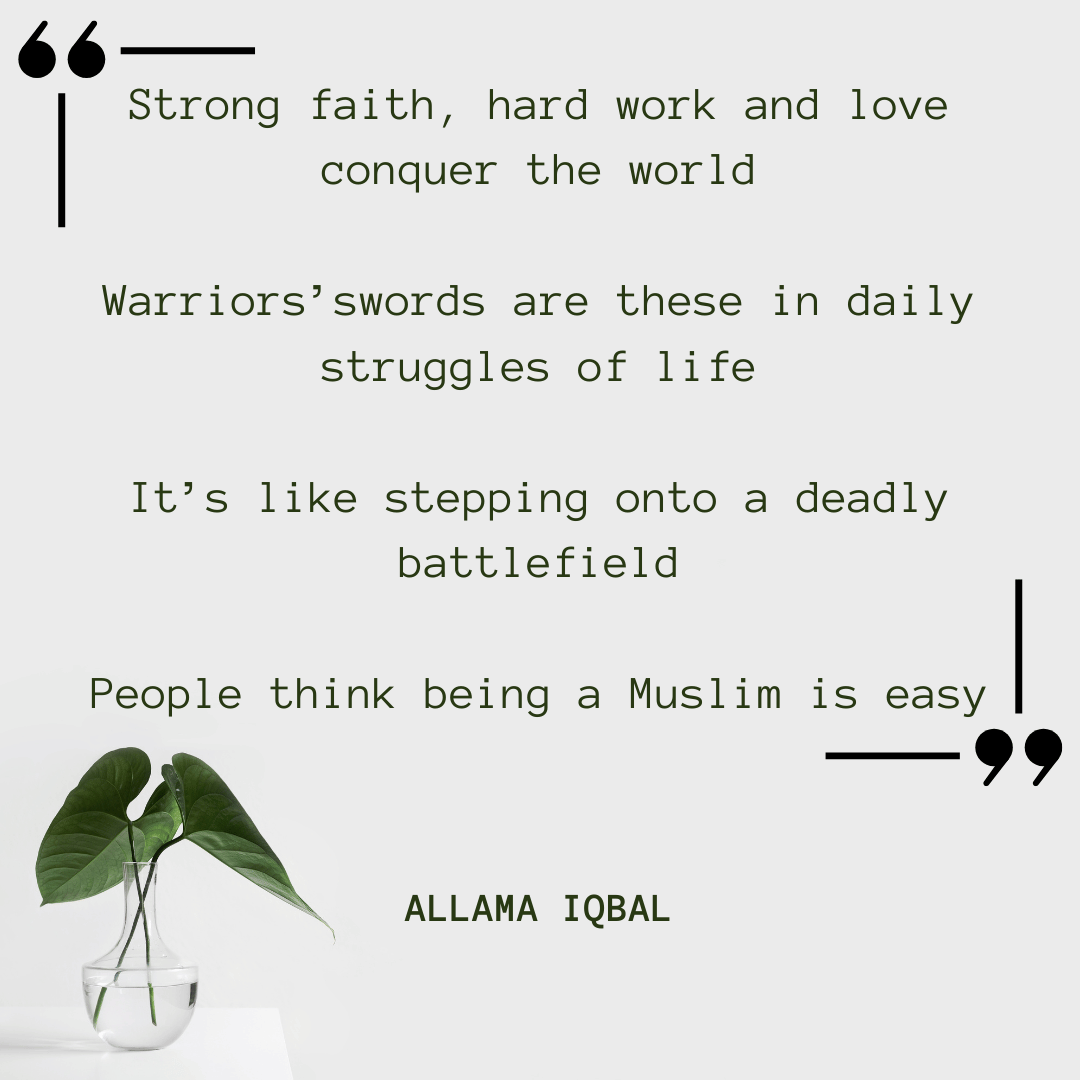 The above verse celebrates success and promises those people who try hard, make effort, and spend every ounce of energy to please Allah. The promise is that they will be guided, shown the path and protected from going astray. The Arabic noun Mujahada, means “making the utmost effort that one is capable of to defend oneself against an enemy”. There are two types of enemies, internal and external, the internal enemy of man is his own will, selfishness, self-centeredness, and the lowly desires which urge man to seek pleasure. Amongst the external enemies is the Shaitan the arch-enemy of man, constantly whispering in his ears evil thoughts and goading him to disobey his Lord and to rebel against the Shari’ah.

Imam Abul Qasim Al Qusharyi said, “if you do not work hard at the start of your journey on the path of Allah then you won’t receive the benefits of it… It’s a serious mistake to think you will achieve anything without persistent hard work”.

The saint As-Sari said, “young men, work hard before you reach old age like me. When you will become as negligent as I am”. The hard work that Shari’ah demands is opposite to one’s passions and refusing to be self-centred is to rigorously practice the Shari’ah.

The Prophet’s teachings on working hard

Abu Huraira narrated the Messenger of Allah (peace be upon him) said, “Allah said: I declare war against anyone hostile to my friend. The best thing my servant can do to gain my nearness is to fulfil the obligatory duties and continue to draw nearer to me with voluntary activities. Then I love him and I become his hearing with which he hears, eyes with which he sees, hands with which he holds, and legs with which he walks. Were he to ask something from me, I will give it to him and if he wants my protection I will protect him” (Bukhari).

The duties assigned to a believer include the five daily prayers, fasting, giving charity, and doing the Hajj. However, the man of Allah loves the Lord so much so that he goes beyond the call of duty and spends far more time doing voluntary acts to please the Lord, whilst the obligatory acts take only a small amount of time, the voluntary acts can be carried out any time and all the time.

Anas reported the Prophet (peace be upon him) said, “Allah says when a person comes a hand span near me, I come forearm’s length near to him and when he draws near to me forearms length. I draw full length near to him. When he comes walking, I come running” (Bukhari).

Ibn Abbas reported the Messenger (peace be upon him) said “there are two gifts which people often neglect: health and free time” (Bukhari). We neglect their significance and therefore will be losers in the hereafter, we often neglect taking care of our bodies and waste time on useless activities.

Aisha, the mother of believers gives a vivid description of his (peace be upon him) efforts she said “the Prophet would stand in prayer sometimes for so long that his feet would swell and I would ask him, why do you do this when Allah has forgiven your past and future errors and he would say, shouldn’t I become a grateful servant of Allah” (Bukhari).

To get to Paradise you must work hard

Abdullah ibn Masu’d said the Messenger of Allah (peace be upon him) said “paradise is nearer than your shoelaces and so is hell” (Bukhari). This means it is easy to get to either heaven or hell, it’s well within our grasp, and it’s up to us!

Rabi’ah Ibn Ka’b, the servant of the Messenger (peace be upon him) said “I used to spend a lot of time with the Prophet, I would bring him water for his ablution, and one day he said to me, ask me whatever you want, I replied give me your company in paradise, he said anything else? I replied that is it. He said, help me in your request by hard work in worship” (Muslim).