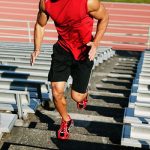 The athlete who spends several hours a day on the track or in the gym exercising their body and building stamina looks hopefully to the day when they will compete and win. They know their hours of toiling and sweating in the smelly gym will bear fruit one day. Their success will breed more success. Then on the other hand we have the successful politician, sat at their desk; the prime minister who can with a stroke of a pen, change the destiny of so many people. Then there is the banker who sits in the Bank of England determining the interest rate, making the lives of millions of people miserable. Then there is the editor of the popular tabloids, who has the power of moulding opinions and everyone dreads them.

The list of powerful and mighty people goes on and on; muscle power, political power, financial power and the power of the pen. They are naked powers and frightfully dangerous. Yet there is another human strength, which is increasingly being ignored in our materialistic age, a strength that is a far more superior than the aforementioned powers.

That is the moral and spiritual strength in every individual, which determines the usefulness or otherwise of their phyiscal, political and financial power. After the death of Musa (May Allah be pleased with him), the Jew’s had a chequered history and they deserted the true religion, fell into idol worship, were disunited and suffered at the hands of the Amalekites. Around the 11th century BC, they begged one of their Prophets Samuel to appoint a king, who would unite them, defend them and make them strong once more, the Quran tells us:

Their Prophet said to them, “Allah has appointed Talut to be your king”. They said “How can he be our king, when we have more right to kingship than him, and anyway he is not wealthy enough?” He replied “Allah has selected him for you, given him vast knowledge and a strong body. Allah gives His kingship to whomever he pleases” (Baqarah: 247).

The objection of the worldly minded was not surprising, they objected that how can one from the working classes be their leader. He was poor too, so that barred him from the high office. Prophet Samuel told them two qualities of Saul (Talut), which made him the best candidate, his deep knowledge and wisdom coupled with bodily prowess. His knowledge about Allah, about the purpose of human life, the traversing of joining the moral and spiritual strength, which distinguished him from other physically strong men, he had a live conscience, he was able to clearly separate the truth from falsehood, able to see vividly what was good and evil. He was morally upright.

What a far cry from today’s morally-bankrupt leaders. This is a symptom of our time, we are concentrating only on physical growth, material abundance, technical skills and the ability to earn a salary. The real strength is sacrificed for the immediate material benefits, the price that humanity is having to pay for ignoring moral strength is the untold misery of single parents, broken homes, and consumerism. Even the office of the most powerful man the President of America is a corrupt and scandalous place because it has lost moral strength.

Moral and Spiritual strength is the real strength

The mirage of the universe, the supreme teacher and our master Muhammad (peace be upon him) said “A strong believer is more preferred by Allah than a weak believer and in each of them there is goodness, be desirous of things that will benefit you, and seek Allah’s help…” (Muslim). Since Allah prefers the strong we should try to be strong. But who is the strong one? He is the one who turns to the originator of all causes, he is the one who is genuinely interested in affairs of the hereafter and is committed to the worship of his Lord. Some commentators say “the strong believer is the one who is patient, has forbearance, teaches and guides people despite them being negligent. He is the one who is physically healthy and strong and can perform his religious duties easily”.

It is this moral and spiritual strength that most world leaders lack and in particular the leaders of the Muslim countries. Imagine how different the 50 Muslim countries would be if they had leadership with these qualities. We can pray for them, but ourselves we can begin to get strong this very moment if we implement the teachings of Islam.