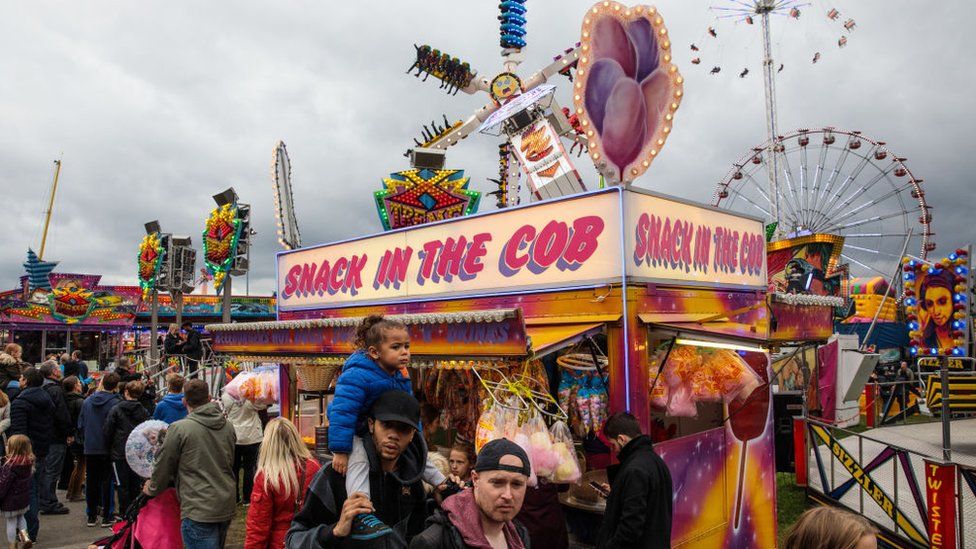 Nottingham is a proud and ambitious city, world-famous for Robin Hood, the legendary outlaw who robbed the rich to give to the poor (what a contrast to the modern capitalist societies that rob the poor to give to the rich). Boots the Chemist, the discoverers of Ibuprofen that relieves the pain of millions globally. But few know there is something else! Goose Fair has been held here for seven hundred years. During the first week of October this historic, huge and frivolous funfair attracts nearly one million visitors to Nottingham. Humans spend their lives trying to get; Pleasure, Popularity and Possessions. Well, Goose fair certainly is the first P of the three.

Since 1985 when I moved to Nottingham, I have gone there with my family and friends. The brochure describes it vividly, “with over 250 rides and attractions with thrills aplenty for all ages, the fair is one of the largest travelling fun fairs in Europe. New rides to Goose Fair include the ‘bungy jump’, ‘Star Flyer’ and ‘Giant wheels’ giving panoramic views across the city and beyond.” Not forgetting the fair classics: ‘Gallopers’ the ‘Cake Walk’ and ‘Hook-a-duck’. No shortage of exotic foods including chips and mushy peas.

For many Nottingham residents, it’s an annual pilgrimage, full of sounds, smells, laughter, colours and crowds. Hyson Green a poor inner-city area is enlivened, as it becomes the focus of city life for ten days and nights. Throngs of people, mums and dads pulling children’s hands, toddlers digging into big candy flosses, infants waving heart-shaped balloons. It’s a spectacle worth watching even if you don’t go on any of the rides.

How can I justify going to such a worldly, frivolous place of merriment? The Messenger (peace be upon him) used to visit the annual Fair of Ukaz held in Makkah from time immemorial. Apparently, it is still held near Taif. It was a cattle market, that sold merchandise from Syria and Persia, a slave market, a sports arena and a cultural festival.
Furthermore, I go to meet people, do Dawah, take leaflets and let my grandchildren go on the rides. But there’s something else, it’s a reminder of the ephemeral, fleeting nature of the world, here today gone tomorrow. The Goose fair comes and gives a temporary pleasure and then disappears. The Majestic Quran repeatedly tells us that the world is also like this. Here are some thought-provoking Quranic passages describing this frivolous nature of the world and teaching us to think beyond the Goose fair.

The parable of life and death
“Tell them a parable of worldly life; it is like the rain We send down from the sky, it’s absorbed by the soil, and plants grow that quickly turn into dry straw scattered by the winds. Allah has power over all things. Wealth and children are beautiful decorations of this life. However, good deeds will remain with your Lord, an excellent reward and hope” [Al-Kahf:45-46].

Admission of wasted lives
“If you could see them, as they stand looking down on the Fire on Judgement Day; they will say, “If only we could return, now we will not deny our Lord’s signs we will be believers.” This will not happen instead what they once denied will appear before them; and even if they returned to this life, they would go back to doing wrong, they are liars. They say, “Only this life exists. We shall not be brought back to life.” If you could but see them as they stand before their Lord. He will say, “Is this not real?” They will say, “By our Lord, indeed, it is.” Allah will say, “Taste the torment of what you used to deny.” Those who deny the meeting with Allah shall be losers. Only when the Final Hour overtakes them suddenly will they say, as they bear their burdens on their backs, “Alas for us, that we wasted this life!” … This worldly life is a sport and an amusement, but the home in the Hereafter is far better for the mindful. Do you not understand?” [Al-Anam:27-32].

The short-lived nature of worldly life
“You should know that the worldly life is a sport and an amusement, an attraction, showing off among yourselves and having the desire for more wealth and children. Its example is that of rain, when it comes down the farmer delights in the rapid growth of his crops then they ripen and you see them turning yellow and eventually they become dry stubble. And in the Hereafter will be severe punishment for the disbelievers but forgiveness from Allah and his pleasure for the believers. The life of this world is a provision that deceives. Therefore, take heed and race ahead of each other for your Lord’s forgiveness and paradise, its breadth is like the breadth of the heavens and the earth prepared for those who believe in Allah and his messengers. That is Allah’s grace He gives it to who He pleases. And Allah is the most gracious” [Al-Hadid:20-21].

Here are some of the life lessons that we can learn from the experience of Goose fair: