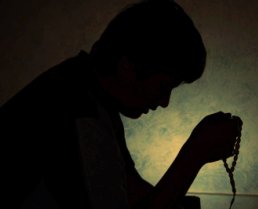 Muslims believe that man is God’s representative on earth (khalifatullah). He is the most respected vicegerent, chosen by the creator to play a prominent role in fulfilment of the Divine plan. Such a noble status naturally creates a positive mindset.

Islamic teachings demand a great deal from the faithful expecting him or her to pray five times a day. The ritual of prayer whilst connecting the faithful with their creator, connects him to himself and others around him. It produces a state of calmness, peace, removing stress and a real sense of belonging. This has a positive impact on human physiology. If we remember that 50-70% of primary care problems are a result of stress then we can see what difference spirituality and rituals can make to human well being.

With the ever increasing pace of modern life, the greater spending power and growing consumerism is there a way out? Where can you find calm and peace? Where is sanctuary? The prayer is the answer for the faithful. It provides him a regular order, stability and allows him or her to block out the noises. Some recent research also points to the value of faith and rituals to health and well-being.

Muslims are described as “those who overcome anger and forgive people”; God is described as the forgiver. So forgiveness a moral virtue is a quality of a true believer. Research shows that forgiveness works in at least 2 ways: Firstly, forgiveness reduces the level of stress caused by the anger, bitterness and hatred. Such a state of unforgivingness produces hormonal changes which causes high blood pressure and cardiovascular diseases. Secondly, forgiveness helps a person to make friends rather than enemies and it helps to build positive relationships.

There is constant emphasis on maintaining a positive state of mind; “never lose hope in God’s mercy” (Zumar: 53), this is beautiful advice since “God’s mercy is near to the doers of good” (Al-Araf: 56) says the holy Quran.

Some of the Islamic prohibitions would be the dream of any chief constable.  Such as alcohol is forcefully forbidden, so a Muslim is absolutely dry. The strict laws on modesty and prohibition of sex outside marriage would considerably reduce STD’s and the list is endless. Although faith is primarily about saving the soul for the life hereafter it pays dividends here on earth too. May Allah give us the tawfiq to follow our beautiful deen as we ought to. Ameen!