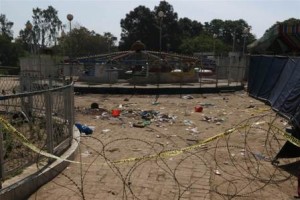 Lahore mourns the death of its 70 citizens on Easter Sunday. We pay our deep condolences to the bereaved families. This was a cowardice attack by the notorious Taleban against innocent citizens of Pakistan. The responsibility of this rests squarely on the shoulders of the Pakistani government and perhaps more so on its military. The people of Pakistan are now fed up of this mess and horrified at these atrocities. How long will it be before we see peace and harmony in Pakistan, in particular the minorities. Let us use this time of grieving to build bridges between communities and share our commonalities rather than focus on the difference.

The Pakistani Minister of religious affairs Sardar Muhammad Yusuf addressed an impressive conference of Islamic scholars, politicians, academics and journalists in January 2016. This was the conference on ‘the rights of religious minorities in Muslim countries’, organised by Shaykh Abdullah bin Bayyah and hosted by the King of Morocco. The next morning at the breakfast table I asked the Minister how they were protecting the Christian minority in Pakistan? He told me, ‘we are doing everything in our power’. Unfortunately the Easter Sunday attack on Christians in Lahore clearly contradicts what he said. The indiscriminate killing of 70 innocent Pakistanis both Muslim and Christian together was a shameful act of cowardice. The brutality of the attack can be noticed from the fact that many victims were children playing at a funfair in the park.

The Minister shared with the conference a catalogue of rights of minorities in Pakistan. However, he failed to recognise the fact that the role of government is to protect its citizens from harm. He failed to acknowledge the weakness of Pakistani government, which has very little support from its military. As a consequence the country is becoming increasingly lawless and violent. The Taleban claimed responsibility for this atrocity, a terrorist group that has disfigured the destiny of not just Afghanistan and Pakistan but the Muslims globally. A group that that is not just violently extreme but has taken violence to an extreme degree; even children and women are no longer safe, a group that is destabilising many Muslim countries and causing untold damage to the reputation of Islam.

The conference was convened in order to celebrate 1,400th anniversary of the Charter of Medina. This was the constitutional contract that the blessed messenger Muhammad (peace and blessings be upon him) made with all the people of Medina including the pagans and the Jews. This treaty guaranteed all of them religious liberty regardless of faith.

The recommendations of the conference were succinctly summarised in a document called ‘Marrakesh declaration.’ It expects the governments of Muslim countries to protect the faith and the dignity of their non-Muslim citizens particularly: ensure the freedom of movement, property ownership, mutual solidarity and defence, as well as principles of justice and equality before the law.

The Charter of Medina provides a proper framework for national constitutions in Muslim countries, like the United Nations Charter and the Universal Declaration of Human Rights. The dangers of not protecting religious minorities in Muslim countries can be devastating not only for the security of the country but global peace. It will also undermine the legitimacy of religious teachings, and make the beautiful religion of Islam a joke.
The conference also recommended that Muslim scholars and intellectuals globally must develop a legal system rooted in Quran and Sunnah that underpins the concept of citizenship which is inclusive of diverse groups.

The conference urged educational institutions and governments to be bold and to review the educational courses and remove all traces of extremism, discrimination and resentful attitudes towards the other. The politicians were urged to promote community cohesion and strengthen interfaith relationships through various programs and activities as well as taking legal steps to stress the importance of pluralism and diversity.

Perhaps one of the most important recommendations was that civil society should start a national movement in Muslim countries that raises the profile of religious minorities and raises awareness about their rights and to ensure that strong bonds are created among Neighbours. The delegates emphasised the need for confronting religious bigotry, vilification and denigration of what people hold sacred.

It is irrational and unfair to judge any group by the actions of a tiny minority no matter how loudly they proclaim to be champions of that group. Similarly we urge our Christian friends and others to avoid rejecting Muslims just because of the terrorists. Islam is a religion of peace, harmony and human brotherhood. The messenger (may peace and blessings of Allah be upon him) said, “Allah is most gentle and loves gentleness in all matters”(Muslim). Once he (peace be upon him) said, “Make things easy and do not make them difficult, make people happy by giving glad tidings and do not turn people away” (Muslim). He (peace be upon him) warned against harshness and severity in dealing with others; he (peace be upon him) said “a person who is not gentle will be deprived of all good” (Muslim).

How can such beautiful teachings be distorted? Who can equate this deen with violence? The Taleban and their ilk are the enemies of Islam and humanity. Let us pray for peace and stability in Pakistan and the whole world.