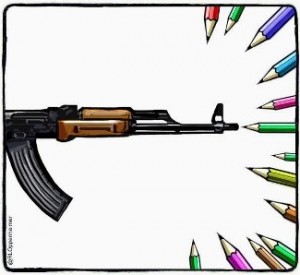 Dr Musharraf Hussain reflects on why both Muslims and Christians must affirm their commitment to freedom of speech.

As an Imam and faith leader in the Muslim community I deplore the actions of the gunmen who carried out the killings at the offices of Charlie Hebdo in Paris. In light of the massacre of ten journalists and two police officers we must once again reiterate a fundamental pillar of human freedom – freedom of speech. What we write and how we express ourselves is also important, the pen is a tool that can be used for the good of humanity and also to ruin it.

“By the pen and all they write! By the grace of your Lord you are not madmen, and for your hard work there is never ending reward. Surely you have a strong character.” (Quran 68 ;1-4). These are the opening verses of chapter 68 of the holy Quran that stress the importance of the pen and what it writes. At that time the majority of society were illiterate and could not read and write. The pen was the instrument for preserving Divine Writ, Holy Scripture and life transforming wisdom.

The written word had the power to transform people’s beliefs, ideas and assumptions about reality, this changed people’s attitudes and outlook on life, it gave them a new meaningful purpose of life, and opened new horizons far beyond the confines of carnal desires. In fact, it gave them the ability to peep into their future, the life hereafter and see the consequences of their good and bad actions. This led to changes in their behaviour. The pen is mightier than the sword.

In 1400BC the Egyptian pharaoh was very powerful with an army and thousands of swords. But Moses had a pen and ten commandments written on a tablet which laid the foundations for civilised society. Whose influence has endured? In the First Century AD King Herod had a mighty army and thousands of swords but, beyond the part he played in Jesus’ early life, no one remembers him. On the other hand, Jesus Christ brought wisdom that was written down by the pen – it transformed people then, after him and continues to do so to this day. The pen is mightier than the sword.

In the aftermath of the French tragedy, can our political leaders also grasp this? Human hearts and minds cannot be conquered with swords, fighter planes or remotely controlled drones. Human beings need the gentle touch of soothing speech, words that move and phrases that help build relationships. The pen is mightier than the Kalashnikov, mightier than the tank, mightier than the atom bomb. Let us lift our pens to condemn the killing of human beings, and let us ask our political leaders to use diplomacy and peaceful means to bring about a world of fairness and justice for all.