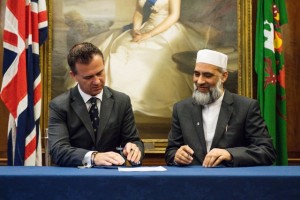 “Love of the country is part of faith”, this well-known proverbial saying was put into practice in full glare of the media on Tuesday 13th December 2016. I as Chief Imam of Karimia Institute proudly signed the Armed Forces Covenant, and with me were another 16 Muslim-owned businesses mostly members of my congregation.

Theology of the covenant

I am also very proud to quote the Blessed Messenger, our Master Muhammed (peace be upon him) when he signed the famous, ‘Covenant of Medina’. This was a pledge between the Jews, Pagans and Muslims, it said “we are one nation” with regards to security and economy. This covenant has guided Muslims throughout history on how to live amongst non-Muslims both as a minority and majority. The signing of the armed forces covenant is in compliance with this teachings of the Merciful master (peace be upon him) that we should be united with our fellow citizens.

We must be always prepared for war and peace

“Prepare whatever you can against the enemy, all the men and war horses ready to terrify the enemy of Allah and your enemies. However, should they incline towards peace, then accept it and put your trust in Allah. Surely, He is All Hearing and All Knowing” (Al-Anfal: 60-61). We live in a very dangerous world therefore we have to be prepared and ever ready to defend our country, the nobility and importance of this duty is being emphasised here by the Quran. This is the role of our armed forces, protecting our borders and legitimate interests. The reward for this from the Lord is munificent.

The beloved prophet (peace be upon him) said; “Whoever trains to fight for the sake of God to protect his country is rewarded like the one in battle, and whoever stays behind and takes care of the soldier’s family will also be rewarded” (Bukhari). This Hadith is singing the praises of those who train as servicemen to serve their country and people who take care of their families and their needs. This is what we are saying when we sign up to the armed forces covenant.

Usman Dan Fodio was regarded as a pious Muslim leader of Northern Nigeria in 19th century, in his ‘Guideline for Leadership’ he writes, “The ruler must have an impregnable fortress fully supplied with food and water, strong horses and camels, and brave men.”[1] This what our British armed forces have, the best weaponry and the best trained professional personnel.

Signing of the Armed Forces Covenant

At Karimia Institute we are promoting the integration and the sense of belonging, this will lead to trusting relationships between Muslims and the rest of the British institutions. By displaying support for the Armed forces we are clearly demonstrating loyalty to Great Britain. So when our board of trustees decided unanimously to sign the covenant I was delighted, it showed how people are eager to express their loyalty, patriotism and appreciation for their country. This is normal behaviour of any law-abiding citizen. That is what Muslims are.

In my press release I said: “We believe that the defence and security of our country is an important job. Those engaged in that task must be respected, supported and appreciated. Muslims are one of the youngest communities in Britain therefore we are encouraging them to join and play their role in defending their country. Thousands of Muslims died for Great Britain during the First and Second World Wars. We are making a solemn promise to show and encourage support for the Armed Forces community. The Muslim community recognises and remembers the sacrifices the Armed Forces have made and continue to do so”.

By signing the pledge, we have committed ourselves to care for the men and women of the armed forces, the government has also enshrined in law this as a promise from the nation that the Forces community will be treated fairly. It will translate as help for service personnel through looking to employ veterans and facilitating the needs of Reserves with support and appropriate levels of leave to work and train.

We were privileged to have in attendance at the signing, Defence Minister Col. Mark Lancaster MP, who himself is in the reserves for 29 years. He said “Karimia Institute’s support is incredibly significant for the proud relationship between our Armed Forces and the Muslim community, and it has already paved the way for Muslim-owned businesses across Nottinghamshire to follow suit. That means opportunities for our people, and that these businesses will benefit from the unique skills and experience which the military community offers”.

The signing of the Covenant will build on the strong ties already established between the Karimia Institute and the Armed Forces, particularly 7th Infantry Brigade, based in Nottingham. Commander of 7th Infantry Brigade, Brigadier Charlie Collins was also in attendance at the event. He said: “We have built a strong friendship with Dr Hussain and members of the Karimia Institute”.

Sir John Peace Lord Lieutenant of Nottinghamshire is Her Majesty’s representative he said; “this is the first time that a Muslim community in numbers, have publicly demonstrated their support for our Armed Forces and hopefully this event will show the Nation that this is entirely normal behaviour, after all, our Armed Forces belong to all the people in the United Kingdom, which is why at public engagements, we often use the term “Your Army”, “Your Navy” or “Your Air Force”. Muslims being part of and supporting the security and defence of our Country is nothing new… Some 400,000 Muslims fought with great distinction and died alongside British soldiers during the First World War. Khudadad Khan was the first Muslim to be awarded the Victoria Cross…Khan fought through the night in the cold and mud of Ypres to hold the line long enough for British and Indian reinforcements to arrive. Then in the Second World War, over 2 million Muslim men and women fought for Britain and the Allies, predominantly in North Africa and South Asia. Noor Inayat Khan was awarded the George Cross in Churchill’s Special Operations Executive, for her service to France prior to being captured and executed by the Nazis. The book (a biography) the Spy Princess and the film Enemy of the Reich is about Noor Khan. Just two remarkably brave Muslims prepared to risk everything in the service of their country and in support of their comrades. We will remember them. And as we look to the future, it’s wonderful to hear of the Muslim youth community actively taking part in leadership training that is being run by Brigade, and we hope to see more Muslim youth and adult volunteers attending cadets in the future. I want to encourage British Muslims to proudly and openly display their loyalty this would be an excellent and ground breaking initiative”.