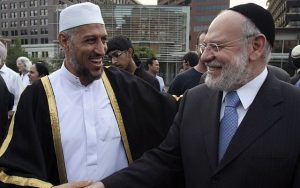 Three of the most common names used by Muslims are Ibrahim (Abraham), Yusuf (Joseph) and Ishaq (Isaac). These are the names of three great Semitic prophets (may Allah be pleased with them). The glorious Quran instructs “Say: We believe in Allah and in what is revealed to us, and in what was revealed to Ibrahim, Ismael, Ishaq, Yaqub and the Tribes, and in what was given to Musa and Isa, and in what was given to all the prophets from their Lord, we make no distinction between any one of them” (Al Baqarah: 136). No wonder Muslim parents are proud to name their children with such names. Furthermore, Islam affirmed explicitly the validity of both Judaism and Christianity. It frankly acknowledged them as religions from God. So this was a step towards accepting “others” and teaching Muslims to respect them. The Quranic refrain, “ guidance, mercy and light” is used some dozen times for describing the Torah and Psalms.

Perhaps these teachings also explain the peaceful co-existence of Muslims and Jews throughout history. Professor Ismail Al-Faruqi, eloquently captures this harmonious living of Muslims and Jews: “After centuries of Greek, Roman and Christian oppression, the Jews looked upon the Islamic state as a liberator. Many of them readily helped its armies, which brought affluence and prestige to the Jews, some of whom became ministers and advisors to the Caliph. Indeed, Judaism and its Hebrew language developed their “golden age” under the aegis of Islam” (Islam and other faiths).

The Quran recognised the existence of other religions and taught respect for the brotherhood of humanity. This promotion of pluralism, to accept that people of other faith have a right to assert the validity and truth of their faith and even claim it as the only true faith was a great step forward in human development. The Quran declared ‘freedom of religion’, “There is no compulsion in religion. Guidance is clearly distinct from error” (Al Baqarah: 256).

The Quran explained these differences in peoples beliefs, cultures and languages as Divinely ordained: “Had Allah wanted, He would have made you one nation, but He chose to test you regarding what He gave you; so compete with each other in doing good works..” (Al Maida: 48).

The fact that Muslims proudly use names of Semitic prophets, the Quran’s insistence on embracing pluralism, respect for humanity, all provide strong deterrents for anti-Semitism. A Muslim who is hostile or discriminatory towards Jews is violating these teachings. The moral virtue of justice underpins pluralism, without justice there cannot be respect and peace in the world. Therefore the Quran urges believers to “Believers, stand up for fairness as Allah’s witnesses even if it’s against yourselves, parents or relatives, and regardless of whether a person is wealthy or poor, Allah has more right to your loyalty than them” (An Nisa: 135).

Jews and Muslims living in the West must both work for establishing justice in the Middle East with the hope that it will once again produce the “golden period” of Jewish-Muslim relations, insha-Allah!