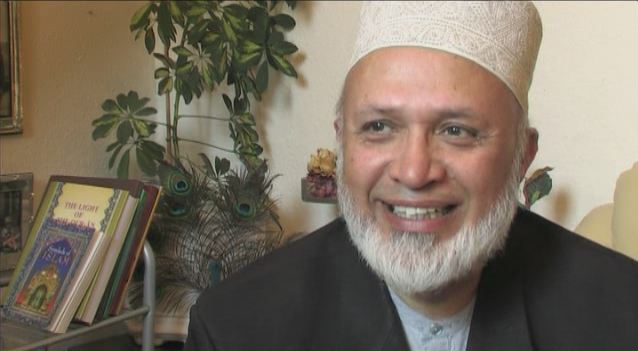 On the 28th February a group of friends and admirers gathered at Karimia institute to pay tribute to an outstanding man in educational field. This was Muhammad akram khan cheema. I feel a great pleasure in introducing this wonderful mentor, friend and a brother in faith.

Cheema sahib, as I like to address him was born in Kenya in 1942. His family had emigrated from Chakwal in Pakistan. In Kenya his father was honoured with MBE for his services to the East African Railway. Young Cheema moved to England in 1960 to pursue further and higher education.

He qualified as a teacher in 1968 from Ormskirk Lancashire. Then he taught for 11 years in primary and secondary schools in Liverpool.

In 1979 he was appointed as inspector of schools in Birmingham. In 1981 he moved to Bradford as a general education advisor then promoted as senior and principal advisor till 1992.

His outstanding contributions during this period included creating better understanding across faith communities, removing stereotypes and prompting pluralism in education. Cheema sahib has worked consistently and diligently over the past three decades and provided a crucial leadership. Passionate about his Islam, ever positive and always willing to share freely his expertise and knowledge whoever comes to him. He has provided advisory and consultancy services to over 50 Muslim Schools.

Over the years Cheema sahib has been a prominent member of many important projects, for example, the government SWANN committee (from 1981-1985), this was an important inquiry into education of ethnic minorities. It highlighted the underachievement of ethnic minorities as well as promoting multiculturalism in education.

He has also been the chairman of the National association of LEA advisory officers for multicultural education, member of central religious advisory committee to BBC and ITC. Chairman of the board of governors at Faversham College. He has vast experience of management, educational issues and teacher training skills, which the British Muslim community desperately needs.

Anyone who has had the pleasure of working with Cheema sahib cannot fail to be inspired by his expertise, wisdom and sense of fairness for all. Ibrahim Hewitt a friend of Cheema sahib writes “My own education has been enhanced by exposure to Br. Akram’s skills, knowledge and undoubted talents, by watching him at work (the best way to learn is by watching a master at work), by talking with him, by listening to him, and by having the honour of working alongside him. I have told many people, when introducing Br. Akram to them, that he has taught me so many things about teaching and learning that it is hard to know where to begin; in fact, it is reasonable to say that he has probably forgotten more about education than I will ever know. I mean it. When working together, without wishing to sound conceited, we are a good team: he is the polished diamond; I’m the rough-edged lump bringing a lay-man’s observations to play on the topic in question. He claims to learn from me, but don’t be fooled. That is just Br. Akram’s legendary charm making me feel good… and it works!”

I have also experienced this in particular during the 3 years when he was the director of the Teacher Training course run by AMS and Glouctershire University.

This teacher-training programme was an exciting development for the Association of Muslim Schools. However, there were few resources but Cheema Sahib took the challenge. It is under difficult circumstances that a person’s real mettle shows and indeed we saw how Cheema sahib worked diligently with real fervour travelling up and down the country visiting trainee teachers in Muslim Schools. I personally witnessed his qualities of forgiveness during these years, despite the difficult situations, the frustrations and beurocratic red tapes he never lost his temper. He is truly an optimist but audacious – that is not a wisely washy type of hopeful but someone who is prudent and who after careful assessment of facts and risk takes bold steps.

He is involved in several national and international projects including teacher and pupil exchanges and staff development. This includes South Africa, Pakistan, Kashmir, Nigeria, India, Sweden, Norway and Germany.

The Glouctershire University conferred an honorary fellowship on him in 2001 for his service to multicultural education.

He is actively involved with Kashmir Education Foundation as well as the International Board Education & resources and the chairman of UK Islamic education waqf.

One wonders where he finds time and energy to do all this work, Iqbal says:

“Can anyone estimate his capacity to do work for destines can we changed by his glance.” And in another verse he says: “The faithful live like the sun, they are constantly on the move like the sine curve rising and falling.”

A lot of Cheema sahibs works is voluntary; in this regard he is like the legendary Mujahid as described in the glorious Quran.

“The believers who sit at home cannot possibly be like those who constantly strive in the path of Allah with their wealth and lives. Allah has conferred a special reward on such people.”

Ibrahim Hewitt makes this pertinent observation “It is not often that you come across someone who elicits praises from almost everyone you meet who has come across him, but Br. Akram is one such individual, masha’Allah. He accepts such praise modestly, of course, that is his nature; and when criticism does come in, he accepts that graciously.”

I am pleased that I have such a wonderful mentor and friend. May Allah bless our brother Cheema sahib with health, longevity and plentiful reward and may Allah bless the ummah of Muhammad with more outstanding people like him.