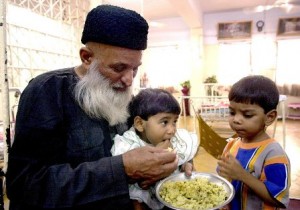 Who looks after 50’000 orphans? Who has saved 50’000 abandoned babies? Who takes care of thousands of women who are victims of domestic violence? Who collects decaying dead bodies and gives them a dignified burial? Who rehabilitates thousands of drug addicts? Who runs the largest network of ambulances? Who runs 336 welfare centres?

Yes, this is the man about whom Peter Oborne ‘The Daily Telegraph’ reporter called a ‘Saint’. He says “until meeting the Pakistani social worker Abdul Sattar Edhi, I had never met a saint. Within a few moments of shaking hands, I knew I was in the presence of moral and spiritual greatness”. Yes, this was the remarkable Abdul Sattar Edhi, his long swaying white beard, dishevelled hair, wearing a blue loose shalwar kameez and a cheap black cap. He died on 7th July 2016 and Pakistan mourns him.

Even in his death he maintained austerity, when someone offered to take him abroad for his medical treatment he refused and said I will stay in Pakistan for my treatment. The pair of shoes he was wearing were bought 20 years ago. This was the pride of Pakistan, the true servant of humanity, a social worker of the most incredible stamina and strength. He has left a void in Pakistani social work and humanitarian field that will not be filled for many years.

He would often say “be kind humans and treat others with kindness”. He epitomised human kindness in such a way that everybody could see his single-minded devotion to the poor and the needy. He spoke little, but did a lot, when he spoke, he spoke about tolerance towards others and care for the distressed. No wonder he was the most trusted and loved Pakistani, he would bravely march into gun battles between the police and gangsters and when he arrived at the scene with his ambulance there would be a ceasefire, shooting would stop until the bodies were collected.

Abdul Sattar Edhi was a remarkable man, for more than 60 years he served his fellow citizens in a selfless way that became a symbol of human goodness and kindness. This most amazing and selfless human being was born in 1928 in Gujarat in the West of India and migrated to Karachi in 1947 after partition. His story began in 1950 when he stood at a street corner begging for money in order to buy an ambulance so that he could rescue people, look after the victims of road accidents and gun battles. That is how he began his life-saving mission. He managed to raise enough funds to buy an old battered van. In this old van he dashed around Karachi picking up the leftovers of gun battles, fatal road accidents and decaying bodies from rivers and fields. A thankless task. It does not mean the people of Pakistan were unappreciative or thankless, in fact on one occasion when he stood at the corner of Mayo road in Lahore collecting funds, young and old, rich and poor queued to give him millions of rupees that was carried away in sacks. What he achieved in 60 years of tireless, sincere dedication to humanitarian work is a testimony to the natural goodness in all human beings.

What made him an outstanding servant of people?

Perhaps the best way to look at his legacy is to analyse his character and lifestyle. He lived simply, when he went to Hajj in his ambulance he told his wife she can only take a small amount of luggage so that he could pack the van with medicine to give to the sick. He undoubtedly was the most famous and well-known personality in Pakistan, a real celebrity but he never lived like a celebrity. He was caring, irrespective of someone’s status, a great leveller in terms of justice and fairness.

He was a true Mujahid, a tireless worker and servant of humanity, who epitomised the following verse of the glorious Quran: “Those who strive and work hard for our sake we certainly will show them the way to success” (Al Ankabut).

May Allah bless his soul and grant him the highest of ranks in Jannat-ul-Firdaus. Ameen!