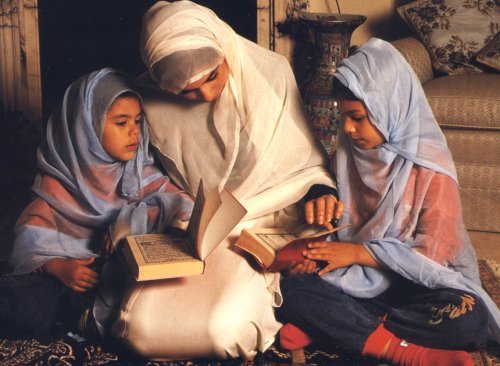 Raising children is a huge responsibility, which can be a great blessing and source of reward if fulfilled correctly. Whilst there are numerous books and websites available on parenting or nurturing, what better place to look for guidance and solutions than the Sunnah of our beloved Prophet (peace be upon him).

The Prophet Muhammad (peace be upon him) said,

“When a man dies, his action discontinues from him except three things; perpetual sadaqah (charity), or the knowledge by which benefit is acquired, or a pious child who prays for him.” [Sunan Abi Dawud]

Children learn from everything they do. They are naturally inquisitive; they want to discover and explore. If their explorations bring pleasure or success, they will want to learn more. During these early years, children form attitudes about learning that will last a lifetime. Children who receive the right sort of encouragement and guidance during these years will be creative, adventurous learners throughout their lives.

Below are 12 ways to help you motivate your children:

1. Help children choose their own goals:

Part of loving children is helping them reach their goals, not super-imposing our goals upon them. Try to expose them to people who have succeeded in areas, which your children are interested in. The motivational force is often more powerful when it comes from someone outside the family.

The cricket team was about to face a team, which humiliated them last year. The coach pulled out the film of last year’s game. The game looked as bad on film as it had that day. It even captured the fans shameful expressions, disgusted with their team’s performance. At first that may not sound like the best motivational tool, but then the coach pulled out a film of his team winning a big game. This time the fans were screaming and cheering, “look how well you played against that other team,” the coach said. “This year you can play just as well against the team that embarrassed you last year. What do you say. Let’s go get them!”

3. Remember the power of praise:

Instead of mentioning to them the two things they did wrong today, let’s talk to them about the ten things they did right. You’ll be amazed at the results. Many people begin their criticism with sincere praise followed by the word “but” and ending with a critical statement. For example, in trying to change a child’s careless attitude towards studies, we might say “We’re really proud of you Ahmad, for raising your grades this term. But if you had worked harder on your Algebra, the results would have been better.”

In this case, Ahmad might feel encouraged until he heard the word “but”. He might then question the sincerity of the original praise. To him the praise seemed only to be a contrived lead-in to a critical inference of failure. Credibility would be strained and we probably would not achieve our objective of changing Ahmad’s attitude towards his studies. This could be easily overcome by changing the word “but” to “and”. “We’re really proud of you Ahmad, for raising your grades this term, and by continuing the same conscientious efforts next term, your Algebra grade can be up with the others.”

Now, Ahmad would accept the praise because there was no follow-up of an inference of failure. We have called his attention to the behaviour we wished to change indirectly, and the chances are he will try to live up to our expectations.

4. Expose children to a variety of activities:

The key is letting the child choose what he or she wants to do. Watch their response and interest. Wait until they ask to become involved, then support them as best as you can.

As parents, we must communicate to children that if they want to give something a try, they should do it. Even strain for it. That is one reason why I climbed Mount Kilimanjaro at the age of 50. I wanted to show the children that even an ‘old man’ can do things that appear almost impossible.

Parents who were trying to get their daughters to stop sucking her thumb decided that they would give her a little surprise every time she went seven days without sucking her thumb. When she was thirty days without reverting to the habit, they gave her a bigger surprise. Rewards have a way of motivating and changing behaviour and they can be particularly effective with young children.

7. Expose your children to people you admire:

My children’s inner motivation has greatly increased by exposing them to some very successful people. They never forget these special encounters. You might be amazed how easy it is to rub shoulders with some of these outstanding people. Many of them want to share their lives with others, particularly young people. There are many influential people who would love to meet with your children, if only for a few minutes, so that some of the qualities that have made them successful could rub off on your children.

Being around an enthusiastic person is like being around someone who is laughing, it’s contagious. Even when you don’t know what someone is laughing about, you start grinning, then chuckling and before long, you’re laughing too. I have found that as a parent, if I am really excited about something, my family tends to get excited too, enthusiasm is contagious!

We have found it very motivating for a child to conform to a contract that he or she has helped to prepare. We have watched our children make adjustments in their lives because they have agreed terms of the contract.

One of the most powerful influences on your child is those within their own age group who are good examples, who encourage them that they can make it.

Children can become discouraged for a number of reasons, an injury, lack of progress, knowing there is always someone who is just a little better. Any of these reasons can make a child lose their energy. The easiest way for children to regain that energy is for someone who cares to put their arm around them, touch their hand or pat them on the back. When someone really listens to how they are feeling, it pumps energy into them and motivates them to pick up at the point where they otherwise would have quit in discouragement.

12. Pray for your children:

There are many dua’s in the Quran, for example “My Lord, kindly grant me upright offspring, you are the hearer of prayers” (Al Imran: 38). “Our Lord, grant us joy in our spouses and children, and make us an example for those who are mindful of You” (Al Furqan: 74).